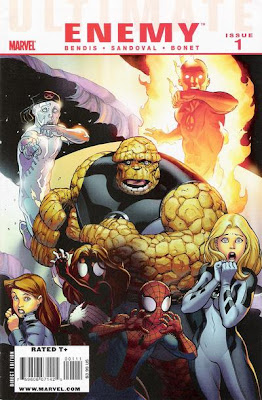 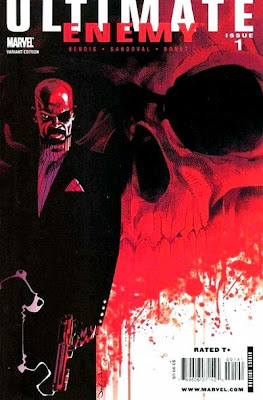 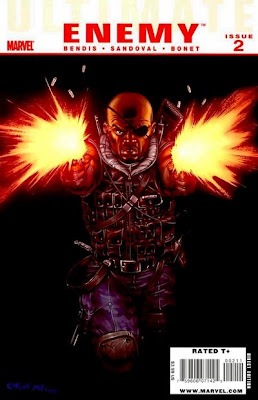 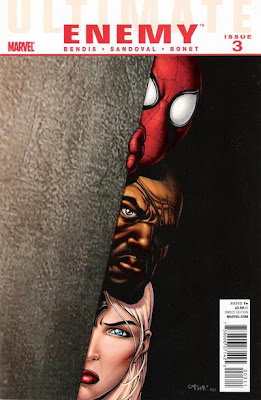 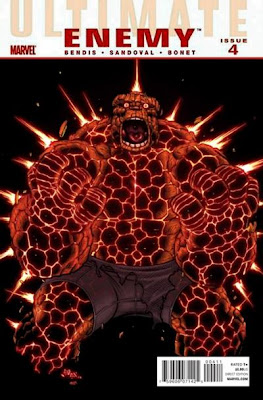 Ultimate Enemy takes place right after the previous Big Ultimate Universe event - Ultimatum (I have not read that as yet, so, it may have a bearing on my judgment of this story)

Spider-Girl, when patrolling the corporation that created her (as she is Spiderman's clone), is suddenly faced with a giant explosion with a colossal blob montrousity!

One by one, the heroes seem to be under a coordinated alien attack by some super-powered armored alien black-ops powerhouses - Reed Richards,Nick Fury, Ben and Sue (the Baxter Building), etc.

The heroes consolidate and manage to capture 1 member of this alien strike team fro interrogation.

On top of that, there are other major developments as well - such as Reed Richards being killed in the alien attack(!!) and the ever-lovin' blue-eyed Thing shedding his rocky skin to become something that looks like the Ultimate version of Capt Universe (anyone remember him?) among other things (no pun intended ;)). 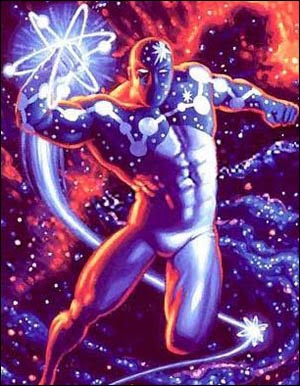 Art
At times, Rafa Sandoval's art reminds me of Stuart Immonen & Carlos Pacheco, at times a little of Ryan Sook (BTW, what has happened to him? I really miss his work!) and a bit of Olivier Coipel & Steve McNiven thrown in for good measure!

Not bad but a little unpolished but you can see his talent. However, having said that, there are some panels that appear to be rushed (not sure if that's his fault or the inker's)

Overall
OK, it's my fault that I have not caught up on what's happened in Ultimatum, but I still maintain that Bendis seems to have lost his touch somewhat as I found it a little hard to relate to the characters - not Fury, Sue Storm, Carol Danvers, Capt marvel, et al. I say this because I really enjoyed his work in Daredevil & Spider-Woman (see http://tiny.cc/8vdny). Well, I hope he bounces back soon! The other reason could be due to the fact that the differences between the Marvel Universe proper and the Ultimate Universe can get downright confusing sometimes.

I mean, in Ultimate Mystery, even Bendis himself (plus his editors as well) got so confused that he wrote the Roxxon Hiring Manager referring to Spider-Girl's infiltration ID (Dr. Julia Carpenter) as Jessica, which is her real name, instead of Julia.

No explanation is given for the Thing's transformation or how/why Rick Jones had been made into some sort of Universal Protector (OK - I later found out that he's the Nova of the Ultimate Universe chosen by the Ultimate Watchers and given super-powers).

Anyway, I personally think that having a cover price of USD3.99 per 22-page issue is too steep for a story that spans 12 issues (despite the clever marketing ploy to segment them into 3 separate 4-issue mini-series)
Posted by JM Loke at 5:30 PM