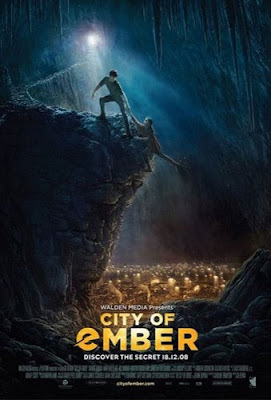 Story
When the surface of the Earth came to an end (non-readers of the book will have to guess that the world or mankind was faced with some sort of extinction level peril), a group of scientists (called the Builders) created a city called Ember deep underground as a last ditch effort to save mankind. The city of Ember, powered by a giant generator, was designed to last for 200 years (the film never explained why 200. They should’ve made it 202 and all the problems they faced would’ve been resolved.)

Citizens of Ember were supposed to be able to go back up to the Earth’s surface and start anew. They were supposed to be able to do this after 200 years in Ember, as detailed instructions were prepared for them by the Builders and kept in a time-locked steel case in the custody of all the mayors of Ember throughout the 200 years. As fate would have it, 1 of the mayors died without having the chance to hand it over to the successor and hence the message in the steel box was lost. The film starts as Ember’s city's lights begin to flicker and food supplies run out while the mayor at the time, Mayor Cole (Bill Murray) totally oblivious to the truth.

The film tells the story of how to young denizens of Ember, Doon Harrow (Harry Treadaway) & Lina Mayfleet (played by a very pretty Saoirse Ronan) inadvertently discovers the truth about the dying city and their struggles to save mankind from extinction.
Acting
Some bits were over the top and seemed contrived but the 2 young leads were pretty convincing in their roles. However, we have to bear in mind that this is after all a film for the family, hence, it would have acting reminiscent of films such as Pirates of the C, Disney movies, etc. 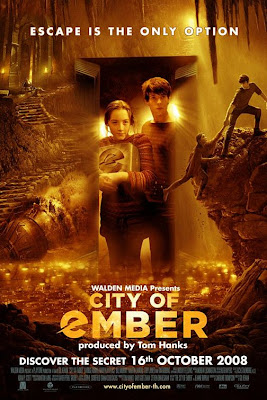 The other bit of unfinished business was that the people who wandered beyond the city’s borders, although labeled as criminals, the film didn’t seize the opportunity to shed light on the matter or what was out there other than some giant creatures (mutated Earth creatures, not aliens or fantasy creatures).

Other than that, I’d have to say that they premise of the story was indeed interesting and it had the potential to be so much more than what it was. Still good viewing for a dull afternoon.
Order your DVD copy here: http://astore.amazon.com/eareotbi-20/detail/B001LPWGBO
Rating: 6/10
Posted by JM Loke at 3:26 PM

yup...i agree with you sir...its not logic for the builders to set such puzzling instructions regarding the way out...but if they don't do so...the show won't be that exciting anymore..haha..for me i prefer it to be longer...coz i wonder how the boys father would be able to convinced the terrified people that there is a way out..and how is everyone going to get out with that seemingly tough way...somemore...rememeber when the boy and girl escape through the water tunnel..they actually made a turn left...how would the people know when to turn left and if they dont...where will they end up...?

Well, I think the movie makers might have thot they could follow it up with a sequel? Who knows? But if a movie like Narnia would not have a Part III, I don't think it's likely City of Ember would have a sequel.

As for the complicated instructions, perhaps they were also thinking of making it into a PC/PS Game.