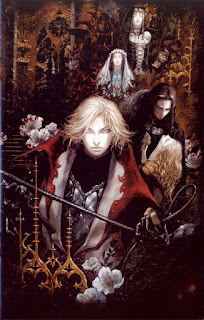 I have never played the Konami game before but it is one of those games that have a really strong following and reputation, which was basically 1 of the reasons why it piqued my curiosity about the series by Netflix (it's those upstarts AGAIN). Moreover, since it only had 4 25-minute episodes in Season 1, my investment was pretty low. 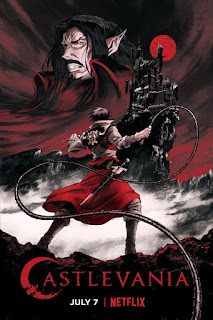 Story
Ep 1 was of course the introduction and showing us how a Vlad Dracula was made to wreak all kinds of hellish destruction to the world because the church of the city of Wallachia where they lived had executed the human wife (Yup, you heard that right) of Dracula. They claimed that she was practicing witchcraft (but was in fact science). Why was Dracula not there to protect her? Well, it was at her behest that he had gone to explore the world outside of Wallachia as a man. 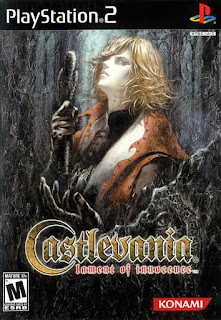 Ep 2 was for me the weakest of the 4 episodes as it was the slowest and least able to hold my attention. However, it was still an essential episode as it introduced 1 of the key characters of the series - Trevor Belmont, Monster Hunter. 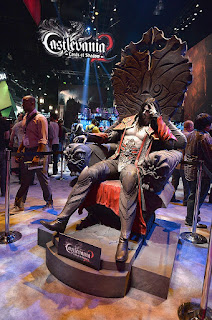 Ep 3 shows us how a wandering Trevor Belmont had come across this ravaged city community. The city is led by the "holy" men who are dead set against a small group of pacifist called the Speakers (because they adhere to the philosophy that all matters can be resolved by only speaking). However, among the Speakers is Sypha Belnades, a Magic user (grand daughter of the Speaker's Elder). She had been turned to stone and trapped underneath the catacombs of Wallachia by a giant Cyclops (with Medusa's powers apparently) as she was searching for the Sleeping Soldier, who was prophesied to save the world. Trevor Belmont destroys the Cyclops and saves Sypha. 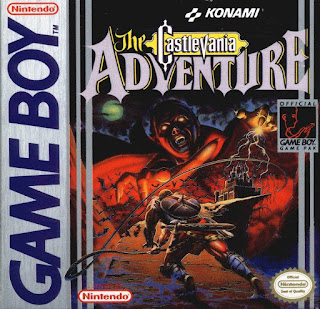 The people have learnt that at every dusk, there will be hellish creatures that descend from the skies to slaughter humans. The "holy men" intend to kill all the Speakers before dusk, as they blame the hellish attacks on the Speakers' presence. 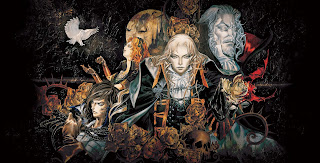 Ep 4 Belmont had hidden the Speakers in the Cyclops' catacombs. All hell breaks lose when night falls. In the midst of it, was helping to fight off the hellish creatures and the "holy men". Due to the massive damage and destruction from all the mayhem, the ground beneath the city crumbles. It is only then we learn how powerful Sypha's magics were. She & Belmont discover a secret chamber down beneath the catacombs and we evetually learn that the Sleeping Soldier is actually Alucard, Dracula's son. Alucard are at odds with his father and wants to destroy Dracula as well. Thus the team is formed. 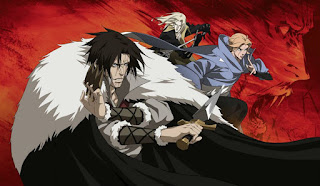 I am quite pleased and like the concept of a Monster Hunter, a Magician and a Vampire on the same team to fight all kinds of evil monsters. It's the same reason why I loved the Van Helsing movie. Sadly, there are no Van Helsing sequels or reboots (yet). 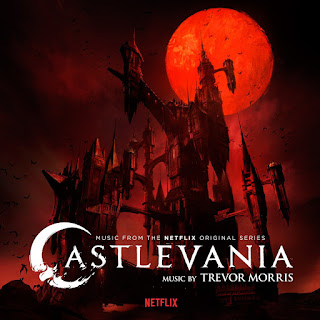 I have to say that I quite enjoyed the series and I'm looking forward to more!

The artwork is amazing. Of course, that's because it was done by Japanese artists. Smart move by Netflix. One thing to note tho' is that this is NOT meant for kids. It can get pretty dark.

I would recommend it even for non-fans like me, it was pretty entertaining and intriguing. As I said before, the investment is pretty low, with 4 episodes clocking in at a little less than 2 hours. Give it a try and let me know what you think.
Posted by JM Loke at 4:19 PM No comments:

Firstly, I have to clarify that I have always been behind Marvel since I was an 8 year old kid, but I must admit that DC has been doing a of things right. Non-geeks all over the world already know how good the Wonder Woman movie is. Expectations are already elevated for the upcoming Justice League movie. 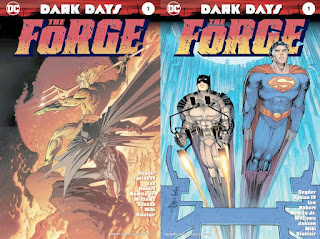 However, as a comic geek, I have to say that I have not felt as much a comic geek as I do now - all thanks ro DC's Dark Days Event. It has brought back the level of excitement I haven't felt since I was a kid. 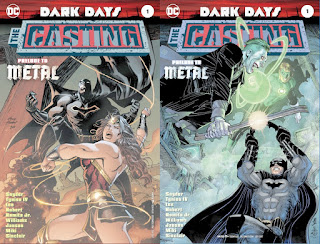 BOTH of these books are SO GOOD. This is especially (and may only be) true for those who have been reading DC comics since the 80's (or around the time of Crisis on Infinite Earths). So for the newer readers, they may not get as much out of these 2 books as the older geeks.

Why these 2 books and the upcoming Dark Days event are making me feel like a kid again is because these 2 books are jam-packed with Easter Eggs on almost every single page & sub-plot. Visual clues are strewn all over the panels and you may miss some of them in a single read.

Here, Batman is seen to be NOT in control of everything, and that gives him jittery nerves. Batman is afraid of something? Something we have NEVER seen before. 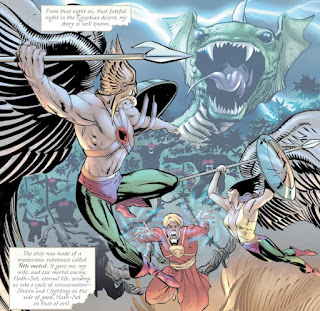 Core to the story is of course Hawkman, who is the narrator of the books. I have always loved Hawkman but DC had always had a tough time with his history. Was he an alien Thanagarian or was he a Human who is the reincarnation of the ancient Egyptian Prince Khufu? It looks like DC will resolve this once and for all with this event.

I have included a few of my favorite Easter Eggs found within these 2 books here:

Anti Monitor's Cosmic Tuning Fork
Crisis on Infinite Earths is one of the BIGGEST company-wide events that happened to DC (some may argue the Industry) and it still is. It was a 12-issue maxi series that streamlined the Infinite Universes of DC into a single Universe. And the Big Bad that destroyed countless universes was none other than the Anti-Monitor. 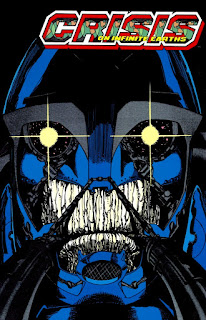 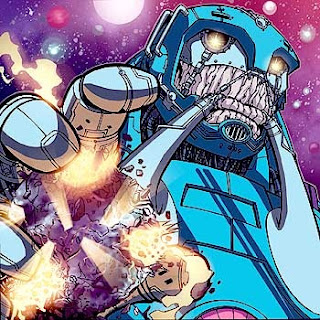 In his quest to destroy everything, the Anti-Monitor had depended on Devices of Universal Destruction (DUDs?) called the Cosmic Tuning Forks. 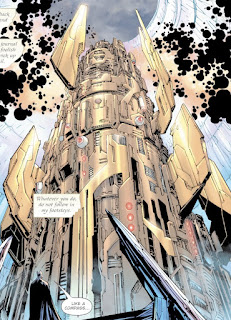 Here, we see that Batman had somehow managed to snatch a unit of such a device and asked Superman to help him keep it save within the Fortress of Solitude.

I have included both the Original (above 2 images) and the upgraded versions (below) of the Anti-Monitor's armor. 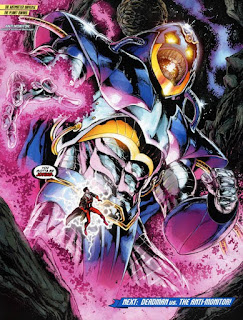 SHAZAM
The sword made from the "Eighth Metal" that was in Talia's possession had the Symbol of the Wizard SHAZAM (whom we also discover is a member of the Immortal Men, along with Ra's Al Ghul, or aka Talis's dad.).

The sword has a black hilt. So of course, we can all expect to see Black Adam. And where Black Adam goes, can the Marvel Family be far? 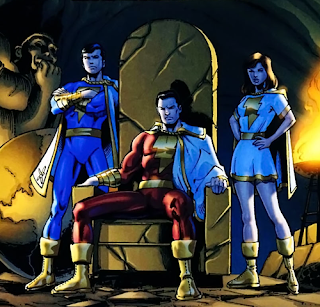 Let's also not forget the Magical Elements that Batman usually does not handle (as he is a man of logic & science). Here we see Wonder Woman handing him Apollo's Sunblade. Oddly, Batman took it without flinching. 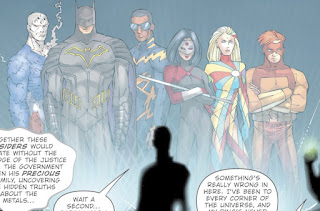 This is also one of my favorite DC Teams (along with Teen Titans and Legion of Super Heroes). This team came out in the 80s and the members were all 2nd & 3rd tier characters (ie: Metamorpho & Black Lightning) plus a few brand new characters like Halo, Katana & Geo-Force (whose sister was a member in Teen Titans and a key player in the Judas Contract - an all-time fan-favorite DC story). 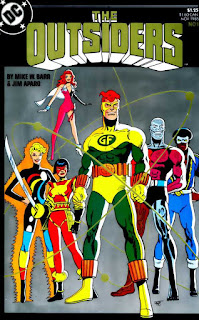 Here, they are described as Batman's very own Black Ops team. Tasked with missions too dodgy for his Justice League team members.

These are 2 of the more popular DC teams back in the 70s & 80s. To be honest, I was never a fan of War comics. Hence, titles like Sgt Rock, Haunted Tank, GI Combat, Unknown Soldier & Blackhawks have never been on my radar. So I do not own or have not read any of their stories unless they are guests in books I read. Perhaps like DC Comics Presents, Brave & the Bold, & Crisis on Infinite Earths. 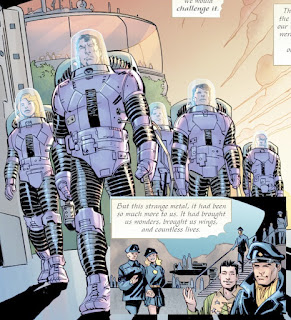 However, Challengers of the Unknown is basically DC's version of the Fantastic Four. And I LOVE the  Fantastic Four despite their dismal performance in the Cinematic Universe & non-presence in the comics the last couple of  years. I admit I haven't read that many Challengers comics but their stories are always as far out and fascinating as Fantastic Four's adventures. 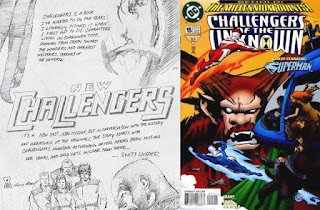 The 4 Clans & the Immortal Men

These 2 issues told us about these 4 ancient clans and also somehow their relationship to each other and the Immortal Men, whose members include Ra's Al Ghul & Vandal Savage

Bear - Immortal Man was Klarn Bear Clan leader in the ancient past. Anthro (see image below) was also from the Bear Clan. 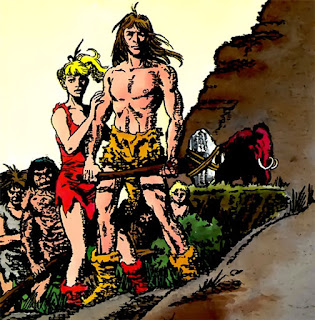 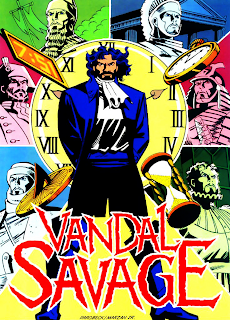 Hawk - Hawkman & Hawkwoman
Bat -  When Bruce was thought dead after Darkseid "killed" him with his Omega Beams in Final Crisis but he was actually ricocheting though time and ended up in the ancient past.
Plastic Man 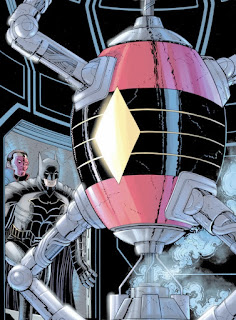 Well, Plas (as he is fondly known by his fans) has never been one of my favorite DC characters but he is well-loved by many. However, he had been missing since the New 52 launch from 5 years ago. So now DC is going to bring him back.

Of course, the other characters that many fans are clamoring for are return of the Justice Society of (we can see Mr. Terrific with Batman here) and the Legion of Super Heroes.
Posted by JM Loke at 11:42 AM No comments: