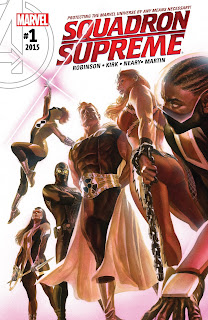 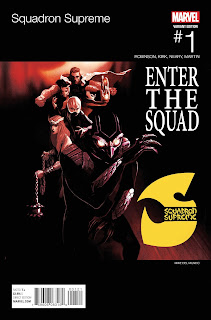 This story takes place in the wake of the recent Secret Wars event (not the one from 1985). This new incarnation of Squadron Supreme members are made up of the last surviving members of their respective universes.
Apparently, in Secret Wars, Namor (the Sub-Mariner) facilitated the destruction of one of the worlds from which a current Squadron Supreme member was from. And now, they all galvanized by the same motivation, to prevent these kinds of planetary/universal threats from ever happening again by any means necessary. (think Marvel's version of DC's The Authority)

The series starts off with the introduction of the 5 team members and their respective destroyed universes they're from.
The first thing they did was to seek out Namor and Atlantis and lay waste to both! Even for a long-time geek like me, it's rather shocking to see the destruction of Atlantis and the decapitation of Namor by Hyperion's super heat vision! 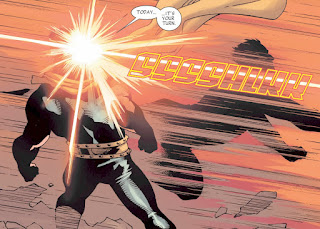 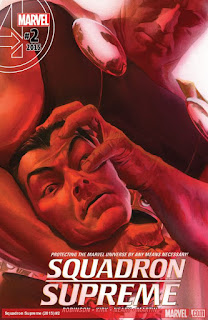 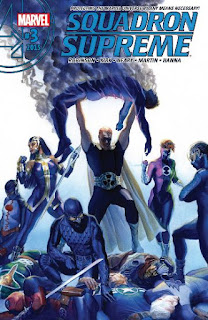 The Avengers Unity Squad* confronts the Squadron but were badly trounced by them. All the while, this battle was being observed by 2 key players:
Thundra & Tyndall from Weirdworld 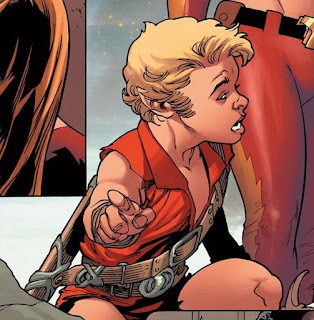 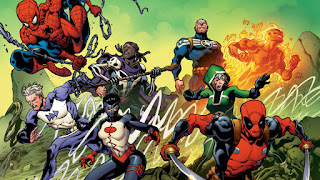 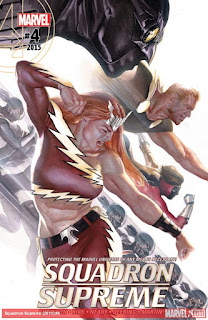 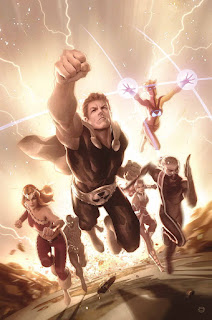 Just as Agent Jim Hammond and SHIELD was about to save the day, the Squadron was transported to another world (dimension?) - Weirdworld, by none other than Thundra & Tyndall (I guess that would be Tyndall's power)! 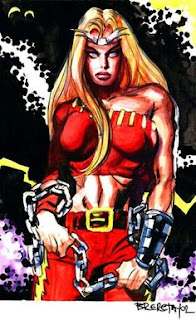 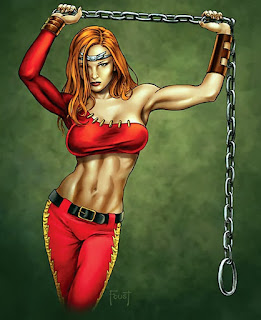 When the Squadron arrives on Weirdworld, they are greeted by a raging Arkon of Polemachus (riding a flying dragon no less) who is hell-bent on destroying them.

Well, if the Squadron was able to make short work of the Avengers, they wouldn't be having too much trouble with Arkon except that Dr Spectrum's powers go haywire, Hyperion becomes weak as a kitten and...Power Princess betrays the team! Remember, these Squadron members are each from a different universe. Thus, this Power Princess was from a universe where the Squadron was NOT Squadron Supreme, but their evil counterparts, the Squadron Sinister, and she's known as Warrior Woman.

Readers would know that Warrior Woman was secretly approached by Modred the Mystic in #2. Now we know it's for this.

At this point, the Squadron is all but defeated and only Thudra manages to escape with the badly wounded and de-powered Hyperion. 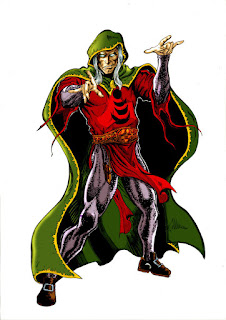 So who is responsible for all that's happening to Weirdworld? The reason Thundra & Tyndall brought the Squadron to Weirdworld was that they were a last ditch effort to defeat the villain - who we now know is the resurrected ex-Avenger - Dr Druid! 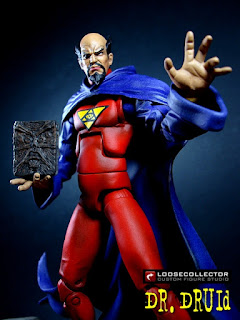 Somehow, Dr Druid has managed to harness the magical energies of Weirdworld and he'd become powerful enough to control the minds almost the entire world's population, including Crystar & the Crystal Warriors! 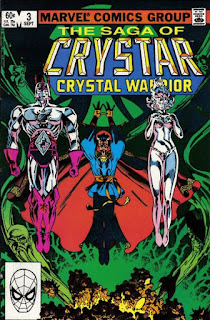 The escaped Thundra & Hyperion are pursued by a horde of Magma Men, only to be saved by yet another player - Skull the Slayer! 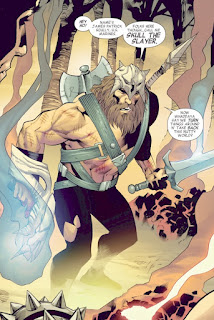 With Skull's help, Thundra, Hyperion and a coalescing Dr Spectrum manage to recover and adapt to Weirdworld's magical environment. Together, they now plan a rescue the others and defeat Dr Druid!

Art
I have to admit I haven't really paid much attention to Leonard Kirk's work. Sure, I've heard of him but nothing he worked really stuck until now. I have to say he's quite good. His lines are clean and almost look like its for a younger audience yet contain enough details that really adds to the writing.

He's consistent, no doubt, plus his layouts & visuals are very fluid, unlike other artists whom I consider to be really good as well, such as Greg Land, Brian Bolland, Travis Charest, etc. Altho' I admit I could think of a couple of other people whom I think might do a better job but Leonard Kirk's doing a heck of a job!

Overall
I haven't felt this kind of excitement in years! I mean, in #1, Namor is decapitated! #2-3, they squared off against the Avengers and WON!!! #4-5 brings us to Weirdworld where we get to see rarely seen characters like Thundra, Tyndall, Arkon, Dr Druid, Skull the Slayer, Crystar & his Crystal Warriors.

Honestly, I can't wait for the next issue. And knowing that an inevitable confrontation with the Inhumans from the #6 teaser cover isn't helping. Go and read this title! I'm really loving this book.

Long time readers would realize and know that the Squadron Supreme is Marvel's attempt to copy/spoof DC's Justice League:

But over the years, as with many characters (yeah, I'm looking at Deadpool), they develop their own stories and their own followers.
Posted by JM Loke at 1:12 PM No comments:

Something For Kate - Survival Expert

This Australian Rock Band from Melbourne is not well known in these parts of the woods and I have to confess that I have never heard of them before BUT when I heard this song on the radio, I was immediately hooked.

I hope they get more airtime and more people will get to enjoy their brand of rock. Let me know what you think!
Posted by JM Loke at 8:51 AM No comments: