I used to love listening to this song but I had forgotten the name of it in the last few years. It took me a while to find this song again. Now that I have found it, I want to share it with all of you. Yeah, the lyrics aren't suitable for everyone (R-Rated), so, you kids have been warned.

To all others, enjoy, and Happy New Year!

Email ThisBlogThis!Share to TwitterShare to FacebookShare to Pinterest
Labels: Music, My Personal Favorites

Anyway, to start off, I thought Loki would be a good choice as everybody knows and loves him from the Thor & Avengers movies, played by Tom Hiddleston. However, I've also included a female version of Loki that perhaps movie-goers may not be entirely familiar with. Yes, there is a kid-version of Loki as well from Journey Into Mystery but that version's head-gear didn't have horns, so...

Wildebeest
This character was introduced in the 90s and I have to admit that despite being a staunch Titans fan/reader right from the start of the Wolfman/Perez era, I had basically lost interest in the book by then. He first appeared to be a villain, then seemingly a misunderstood guy and then I see him on the Titans Team roster. 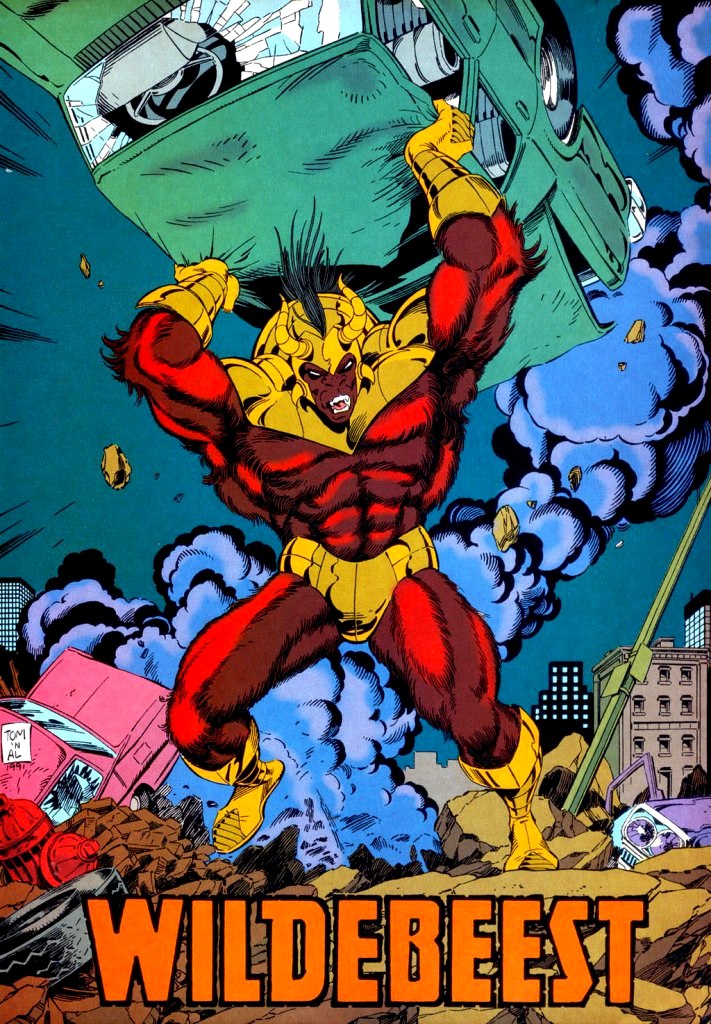 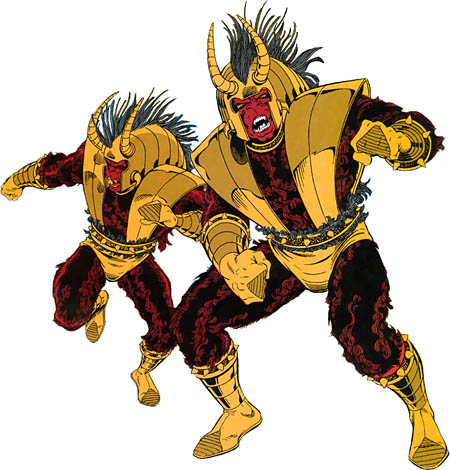 Fin Fang Foom
Remember this name! It's one of those characters Marvel created waaaay back in those Giant Monster days but somehow managed to find a foothold in the Marvel modern universe. This 200 foot giant is usually facing down Iron Man and I foresee him being in a Marvel Movie after Phase 3, after all the Infinity War/Civil War stuff have been completed. 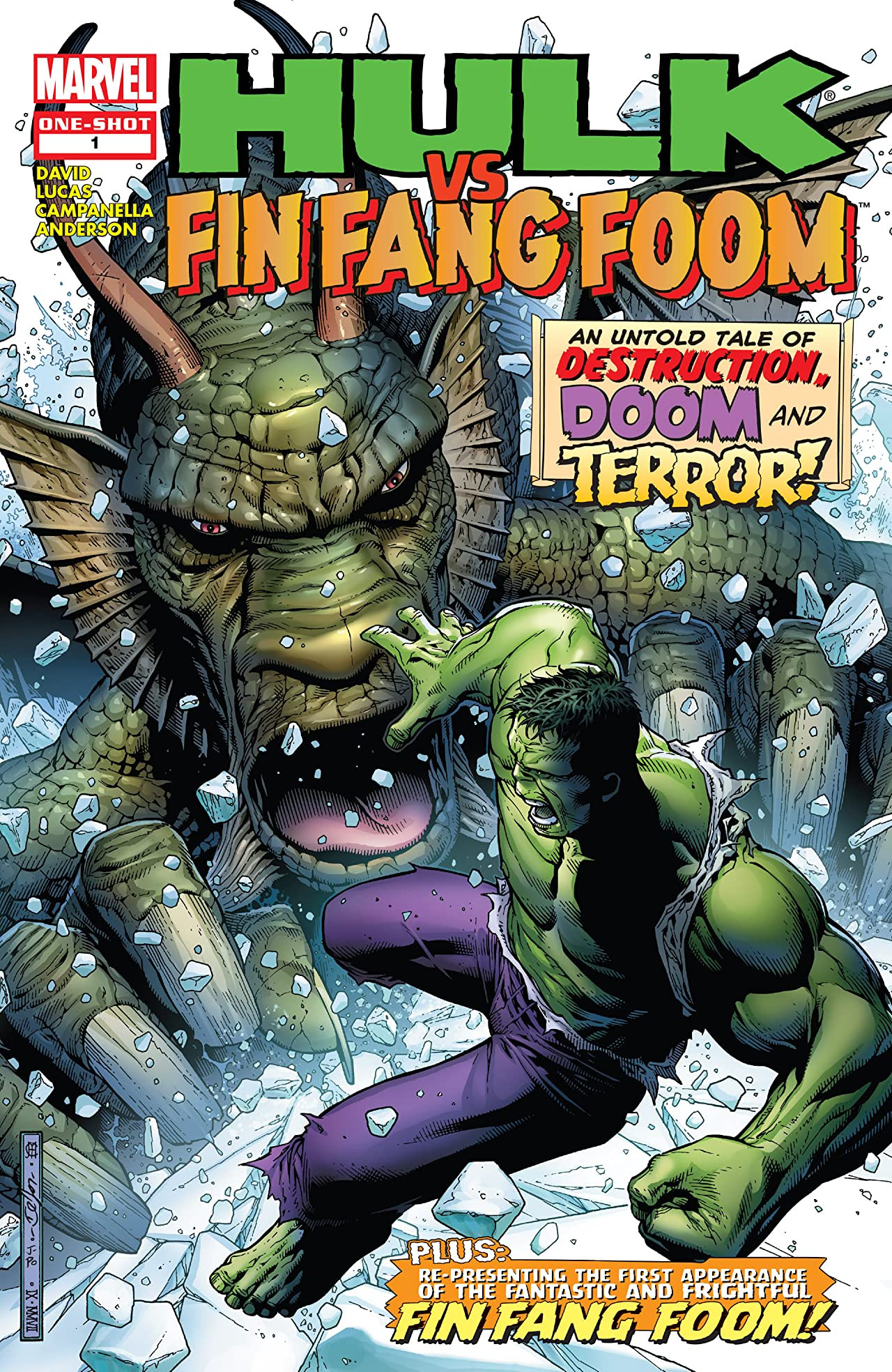 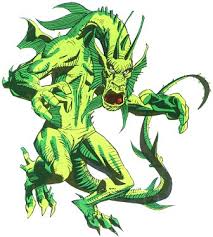 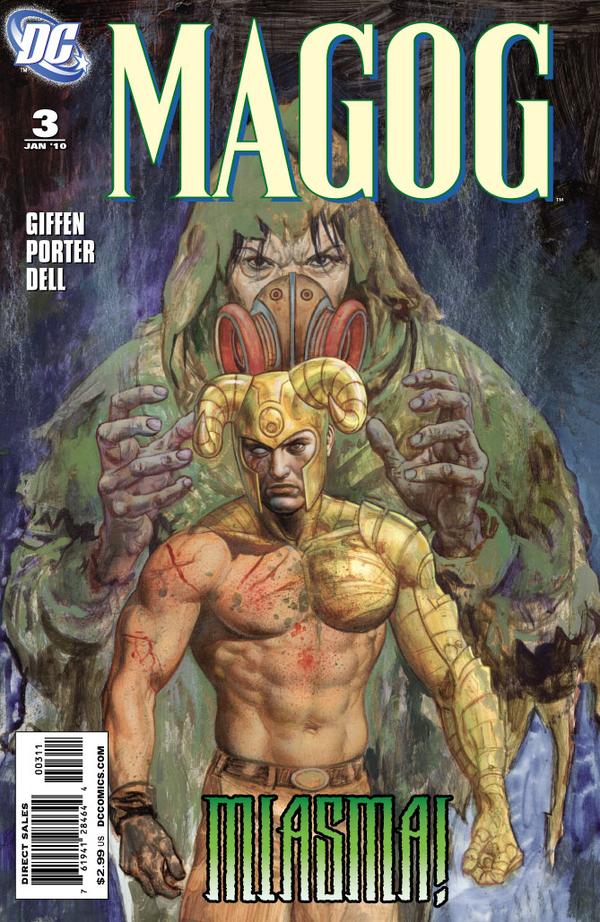 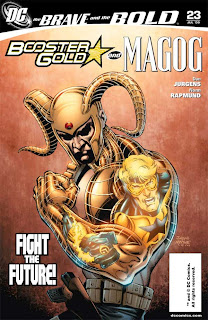 The Demon
One of the legacies Jack Kirby left for DC. Although I don't quite agree with his fashion sense but I think the character is really interesting (I mean, this guy speaks in rhymes. I feel for the writers who have to dream the rhymes up.). I really love John Byrne's version and am still waiting for my collection to complete before I read Byrne's run in Blood of the Demon. 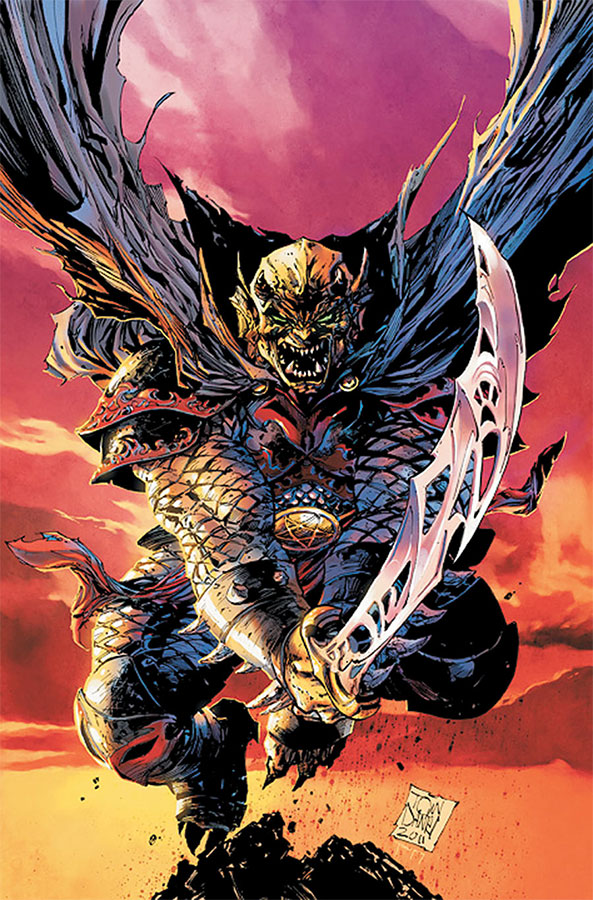 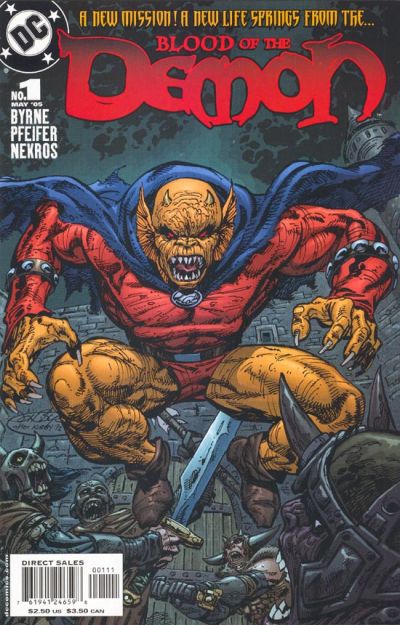 Trigon
The demon father of Raven, one of the Titans' (2nd incarnation from Wolfman & Perez) founding members. This guy is not just scary but scary looking as well. 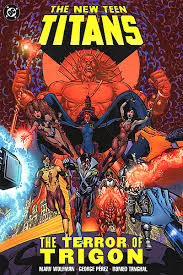 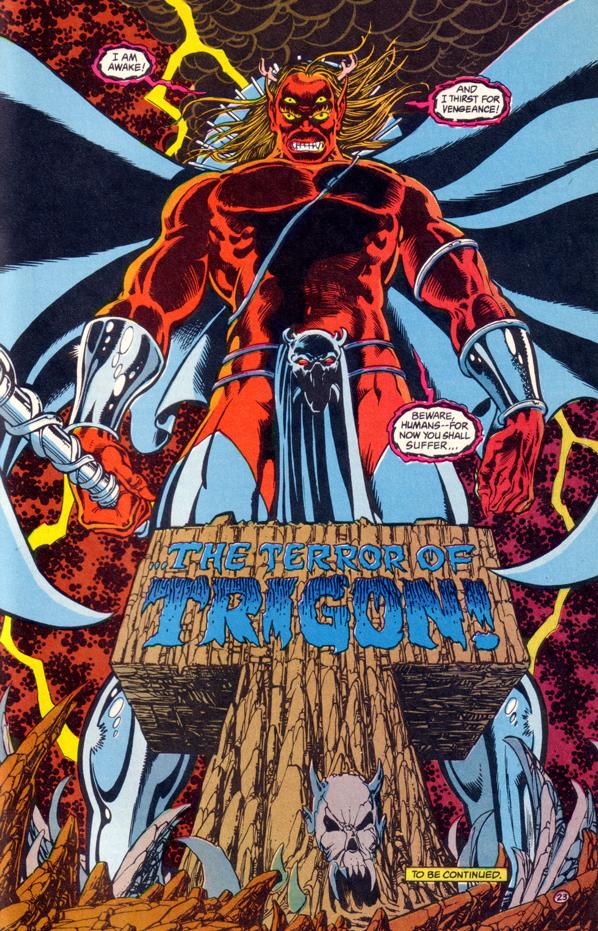 Heimdall
Movie-goers may not recognize him because in the movie he was a black guy played by Idris Elba (which is VERY WEIRD because Sif is his sister but in the movie, she was white???!!!!). Anyway, this guy is the strong and silent type in the books and if he's needed, he's a real bad@$$. Hence, he ALONE (!!!) can guard the Rainbow Bridge. 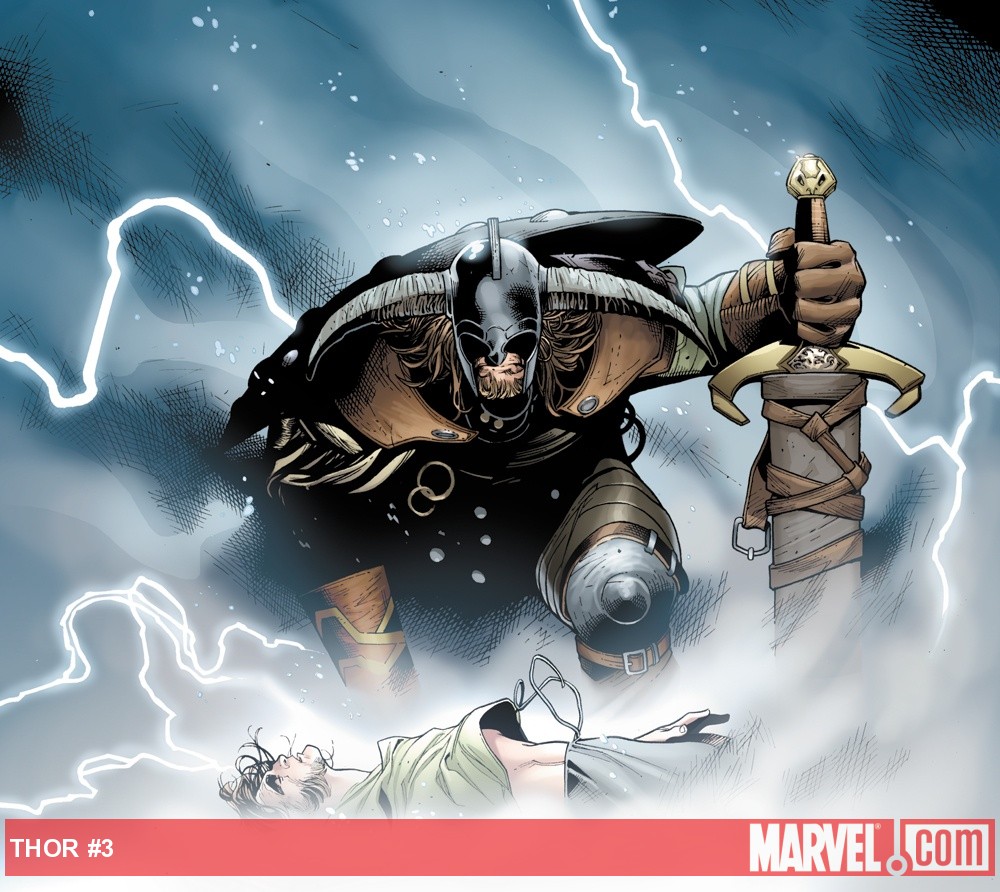 Gargoyle
Now this guy I really doubt anyone would be aware of. He was in the Defenders for sometime way back in the 80s. He even had a 4-issue mini series to himself. I guess he was Marvel's take on the Demon, but it didn't really work out. 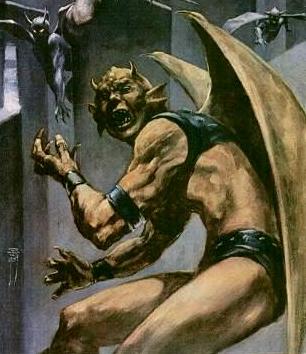 Magik (Yeah, with a 'K')
First introduced in the New Mutants series when Marvel only had 1 X-Men title back in the 80s but X-Men readers already know of her as Colossus' baby sister from the X-Men books. What readers didn't know was that she too had mutant powers. Rhino
Sigh, OK, movie-goers was SUPPOSED to have seen him in the recent Amazing Spider-man 2 movie but we ALL know what a farce that was. Anyway, when he was first introduced in the Amazing Spider-man comics, he was a really fat, clumsy-looking and kinda cutesy villain. Over the years, Marvel has  tweaked his costume to make him leaner and much meaner. As he's sometimes a member of the Sinister Six, maybe we'll see a better version of him when the Sinister Six movie comes along.

Ex Nihilo
One of the latest additions to the Avengers line-up (see review here) from Jonathan Hickman's 2013 run. I'd have to admit that this is one of the most original characters to come out of the Marvel stable in quite a while but the freaky looking design is not going to do him any favours. 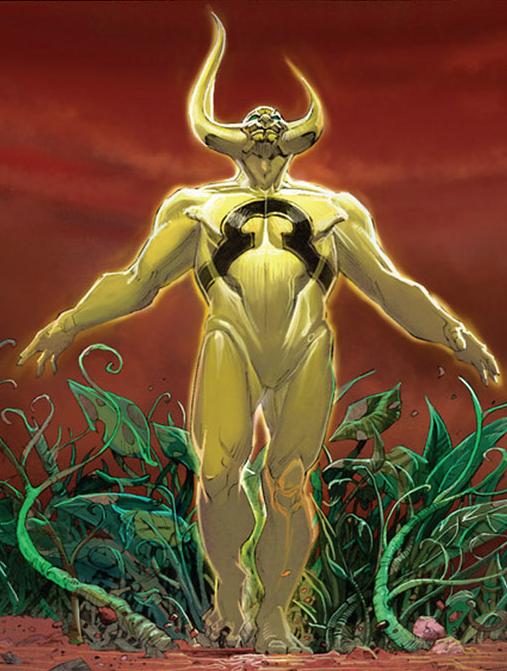 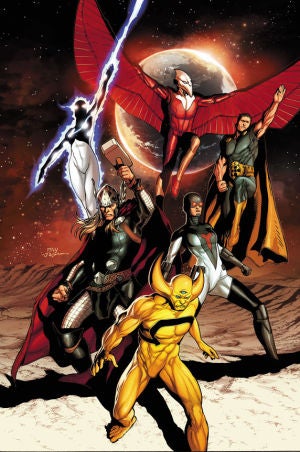 Daredevil
Lovingly called "horn-head" by many, fans were dismayed with the dismal Ben Affleck movie but we are all awaiting the revival from Netflix with bated breadth. One of my favorite Marvel characters to read, thanks to writers like Frank Miller, Ann Nocenti & Brian Michael Bendis. 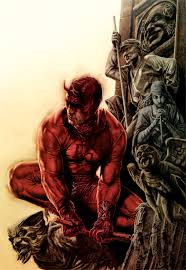 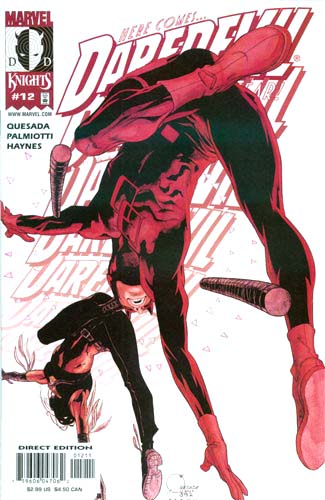 Woodgod
A genetically-engineered being that was introduced in the 70s. I'm a little surprised why he's not used much these days as he was able to stand up to the Hulk (both Red and Green!). How many characters do you know who can do that? 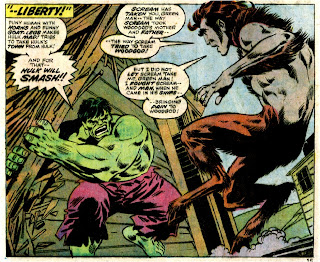 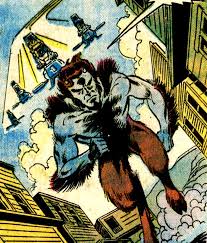 Hogun
Fans of Thor and Norse Mythology will remember seeing the ONLY Asian-looking Asgardian appearing in the movie/comic. This no-nonsense and fiercely loyal warrior (that's why, along with Fandral & Volstagg, they're called the Warriors Three) is a pretty cool. 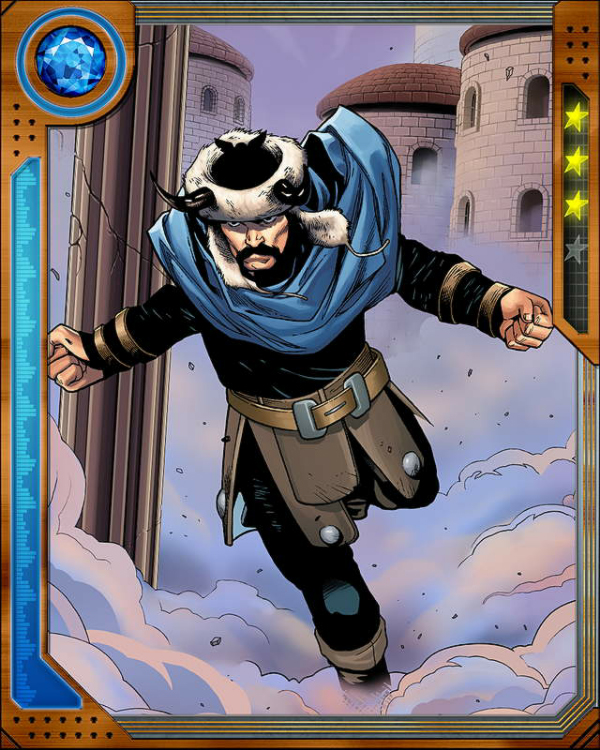 Surtur
Fans of Thor and Norse Mythology will no doubt be familiar with this name as he's responsible for Ragnarok, which destroys Asgard. In comics, he's a thousand foot demon with a big-@$$ flaming sword. 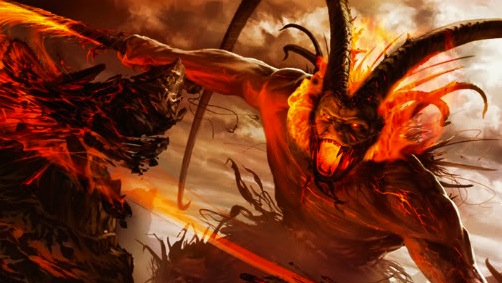 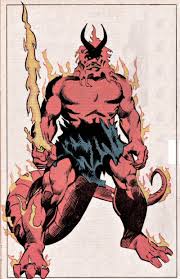 Blue Devil
This is a 2nd-tier character from the 80s. His title wasn't really selling as nobody thought a stuntman dressed as a blue devil was cool. Eventually, DC decided is was way cooler for this character to be a real demon. 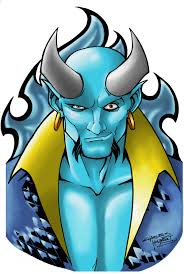 Hellboy
Well, with 2 movies under his belt, I think this guy doesn't really need any introduction. One of my favorite titles from Dark Horse.