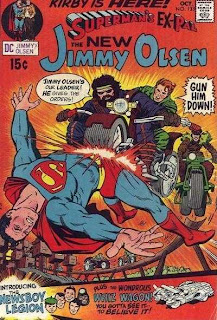 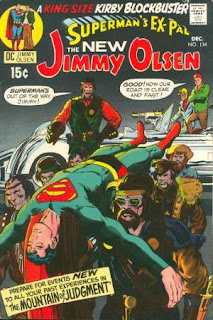 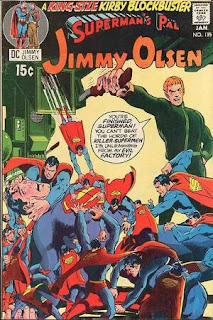 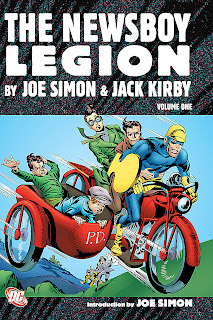 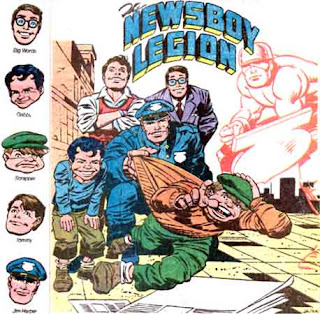 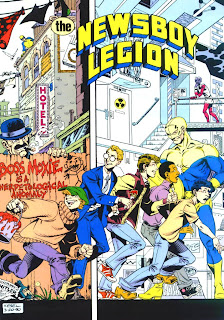 Jimmy was sent by the Daily Planet (that had just been bought over by a tycoon Morgan Edge) to investigate something called the Wild Area, together with the Newsboy Legion in their Morgan Edge sponsored Whiz Wagon - a state-of-the-art vehicle that's very much like a cross between James Bond's & Men In Black's super cars. 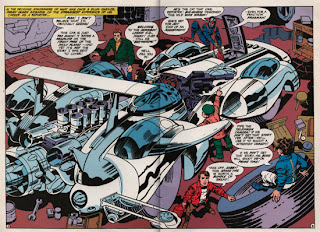 Clark Kent (aka Superman), always looking out for Jimmy's well-being, is suspicious of Edge's motives and digs deeper into the case Jimmy's investigating.

Jimmy & the Newsboy Legion arrive and are confronted by the secret group who dwell there - the Outsiders (not to be confused with Batman's own strike team with the same name.)

There's a scuffle between the Wild Area Outsiders and Jimmy manages to defeat their leader. suddenly, Jimmy finds himself becoming the Outsiders' leader. Superman arrives just in time for the Outsiders to share why there are there - the Zoomway and the Mountain of Judgment. 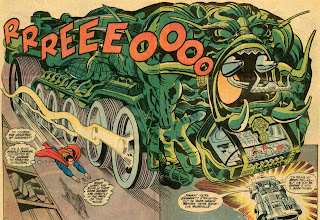 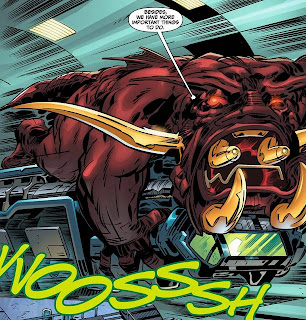 It's later revealed to readers that the Mountain of Judgment is actually a souped-up giant missile carrier which is the mobile home of another youth tribe called the Hairies (Yeah, I know, but this was written in the early 70s).

Readers also learn that Morgan Edge is secretly working under Darkseid's instruction, hence why he sponsored the creation of Newsboy Legion's Whiz Wagon, because is was planted with a bomb
designed to destroy the Mountain of Judgment. The question is...WHY?

Superman, Jimmy Olsen, and the Newsboy Legion leave the Mountain of Judgment and head to a secret government cloning base called the DNA Project. Apparently, the Hairies were the product of DNA Project's genetic engineering.

Meanwhile, 2 of Darkseid's minions, Simyan and Mokkari, are also doing their own cloning and they have cloned a giant Kryptonite-laced Jimmy! 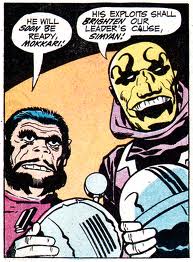 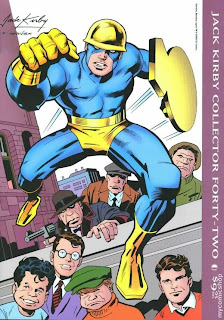 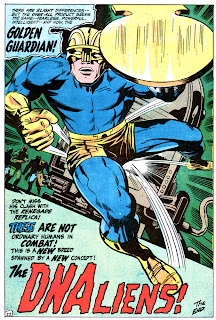 Honestly, as far as old school* goes, I was never a fan of Kirby's art. I actually liked Steve Ditko's Spiderman and Dr Strange a lot more. However, as I grew older, I begin to see the brilliance of Kirby's work in books like Fantastic Four and the start of my appreciation of his creative talent.

His art is not for everyone. I do know of a few people who detest his work. Then again, artistic taste is very subjective. But, regardless of your taste, it is essential reading for all comic geeks.

There's a modern version of Kirby's art style. I have since grown very fond of his work - Ron Frenz. I wonder what he's doing these days as I don't see a lot of his work in recent years.

Jack Kirby's 4th World!
These 4 words alone conjure up images of epic stories & they contain so much meaning behind them that papers have been & were written to expound them. It's one of those EPIC Sagas that span dozens of issues across multiple titles and several years- a concept that was totally unheard of at the time and rare even by today's standards.

The 4th world is where Kirby introduces such key concepts and characters into the DC Universe such as the New Gods, which include Darkseid, Metron and Orion, among others.

Kirby, as any comic fan would know, is a giant in the comic book industry, He had, along with Stan Lee, created most of the Marvel Universe as we know it. Among their creations include the Avengers, X-Men, Hulk, Thor, etc.

This was a period in which Kirby had left Marvel to their Distinguished Competitor and was given full creative reign to tell his stories unfettered.

Wow - I didn't know the Guardian goes so far back. I always thought he was created in the late 80s after John Byrne rebooted the Superman franchise.

Anyway, there are many 1sts in these 3 issues. I'm amped to read the issues following these as they introduce the Forever People, Mr Miracle & Big Barda & the New Gods.
Posted by JM Loke at 5:25 PM