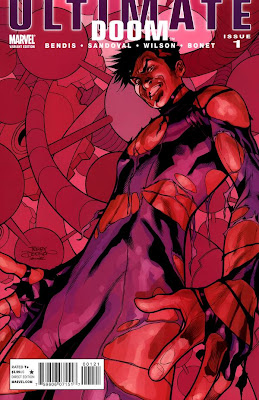 Title/Storyline
Ultimate Doom 1-4
Publish Date/Year
2010
Creative Team
Story: Brian Michael Bendis
Art: Rafa Sandoval
Publisher
Marvel
Story
Continuing directly from Ultimate Enemy, Ultimate Mystery takes us to Ultimate Doom where the heroes bring the fight to evil Reed, who has now become the new Dr Doom!
Sue, being the remaining resident genius after Reed, has pieced together a way for the heroes & SHIELD to reach Reed who was now operating from the Negative Zone! Despite having the heroes together with added fire-power from Rick Jones' Nova & Capt Marvel, they had their behinds handed to them and just barely managed to escape the Negative Zone back to Earth.
Not long after, Reed launches his 2nd wave of attacks. This series shows us the ruthlessness of Reed turned evil. He destroys the Baxter Building (Fantastic Four's HQ), Stark Industries, the Triskelion (the Ultimates' HQ), Castle Doomstadt among others.
Meanwhile, Spider-Girl was infiltrating Roxxon and was caught by Dr Octopus. Spider-Man shows up just in time to save her before all the insanity from Reed's attacks on the nation come crashing in on them.
With all the devastation all around them, Dr Octopus sees to need to help the heroes stop Reed and the bring everyone (this means the Ultimates) to the Negative Zone to stop Reed. 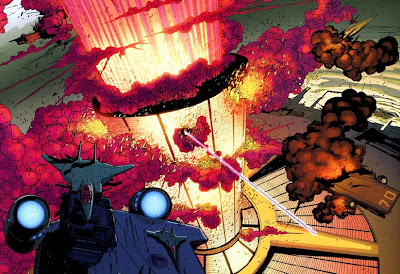 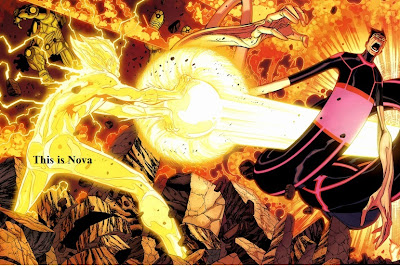 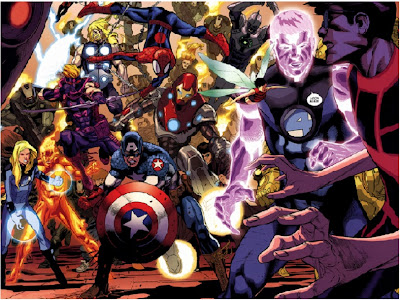 Art
Rafa Sandoval
At times, his art reminds me of Stuart Immonen & carlos Pacheco, at times a little of Ryan Sook (BTW, what has happened to him? I really miss his work!) and a bit of Olivier Coipel & Steve McNiven thrown in for good measure!
Not bad but a little unpolished but you can see his talent. However, having said that, there are some panels that appear to be rushed (not sure if that's his fault or the inker's)
Overall
Having read Fantastic Four since the John Byrne days, I personally found it difficult to read a story where Reed had seriously lost the plot and had become a villain. What I didn't like so much also was that Ben and Sue end up being together.
Well, as this IS the Ultimagte Universe, it needs its different elements to make it separate from the Marvel Universe proper. It's just that I don't quite like this version. How about you? Did you like it?
My verdict is that this is not among my favourite Bendis or Ultimate Universe stories.
Posted by JM Loke at 5:18 PM