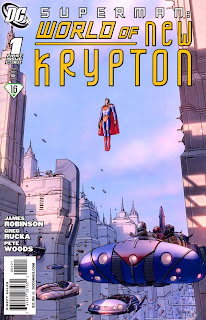 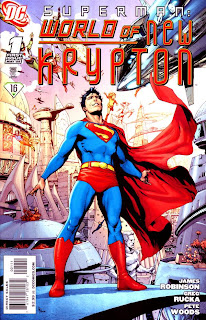 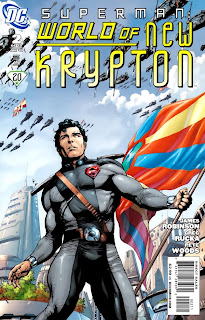 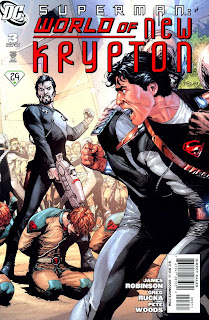 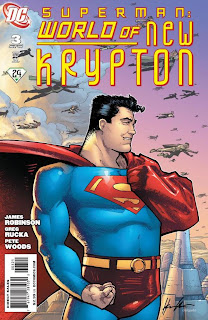 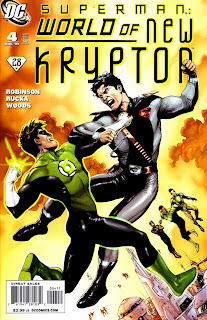 After the events of "New Krypton", the Man of Steel has been forced to embrace his past for the future of humanity. A devastating armed conflict with Earth has been avoided.

Superman has finally left Earth. He flies to New Krypton (which now orbits   opposite the Earth around the Yellow Sun) and greeted by General Zod's men (Zod is one of his oldest enemies). They tell him General Zod wants to see him now, but Superman goes to see his aunt Alura first.

Kal-El (Superman's Kryptonian name) finally accepts Alura's offer to keep him in New Krypton. She is happy with his decision, but advises him to let go of his grudge against General Zod. Superman reluctantly agrees, wanting to be with his people. Alura tells him he has to decide on being associated to a Kryptonian Guild. Superman says he'll need time and goes to see what Zod wanted.

Making his way to Zod's place, he is attacked by Non (a Zod loyalist). Zod said Superman would be a great asset to the Military Guild of New Krypton. Zod tells Superman to think about his offer for him to join the Military Guild.


On planet Oa (the Green Lanterns' HQ), the Guardians of the Universe remember a time when Kryptonian sought universal expansion. They deal with the fact that Superman is, but only one soldier in the Kryptonian Military Guild, not their leader.
The Guardians decide to send Hal Jordan (Earth's Green Lantern)  to observe New Krypton, and to determine whether intervention in the Green Lantern Corps is required. General Zod convinces Kal-El to join the Military Guild, and heads his own unit - the Red Shards as Commander El.
Superman leads his team on a mission to stop a group of wild animals that are stampeding towards a Sunstone (Kryptonian fuel) plant. Superman shows how his team could carry out the mission without killing the animals. Zod notes Superman's strategy has demonstrated his weakness, but could not disagree with the results of the mission.
Upon Superman's return to the city, he learns that the Labor Guild Kryptonian took hostages in the capital, among them, his aunt Alura. They are demanding new laws and union representation.
Superman tries to stop Zod from executing the Labor Guild prisoners. Superman says he can stop the emergency by peaceful means and ZOD agrees. Before Superman faces them, he lets an Archer red-sun energy-rifle shoot him, removing his powers for 30 minutes. Tam-Or, Labor Guild leader, is keeping the provisional government captive among them is Superman's aunt Alura.
Tam-Or said that because the Earth's yellow sun gives them the same powers as Superman's, there was no need for rest or food, and the Labor Guild has worked continuously since coming to New Krypton. They want time to relax and see their families.  Finally, they also want representation in the new Science Council. Alura agreed to consider their requests if the Labor Guild agrees to end the hostage situation. Superman resolves the situation peacefully before General Zod's deadline.
A new planet suddenly appearing in any space would require a inspection of the Green Lantern Corps. When planet New Krypton (formerly Kandor City) appears in the space Sector 2814, it means it gets a visit from Sector 2814's Green Lanterns - Hal Jordan and John Stewart, with Daxamite (super-powered denizens of Daxam) Sodam Yat along for good measure.
But what starts as a good-will mission turns into a manhunt for some of the most deranged and dangerous criminals who escaped from the Phantom Zone (Kryptonian Prison) and ultimately leads to terrible conflicts between the GL Corps and Zod's Military Guild! 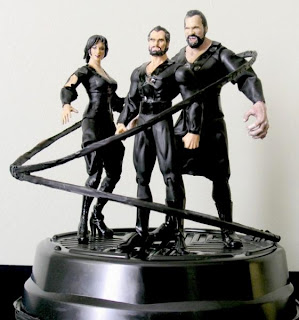 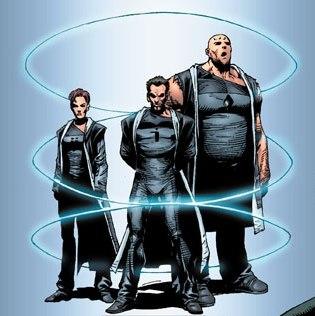 Art
Pete Woods delivers some really nice images. He employs clean lines with very little shadows into his style.
His work reminds me of people like Frank Cho and Terry Dodson. Yeah, it may seem a little too clean and even cartoony or like a coloring book, but it is refreshing to see this kind of "clean" art once in a while.

Of course, Gary Frank (I love him) provides some really good covers for the series.
Overall
James Robinson is a great writer (Starman fans would agree). He incorporates political diplomacy with recial/class segregation into a sci-fi/whodunnit/super-heroics story involving people in situations that readers may not expect like Superman taking orders from Gen. Zod!!
This is a good read and despite not being a big Superman fan, I found myself itching to read the next issue impatiently. Plus, the good art from Pete Woods really help make the entire package a really good read. Get it as this story paves the way for a truly new chapter in the DC Universe for the Superman mythos and Krypton, whom everyone (incl. non fans) know had exploded long ago along with all/most of the Kryptonians.
Posted by JM Loke at 9:07 AM