Developer
Playdom (not Zynga this time) 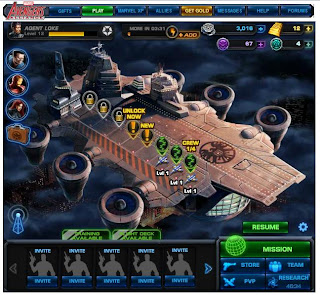 Gameplay
Players start the game as a customizable (Name, Gender & Appearance) SHIELD agent who has been tasked by Nick Fury (the black Ultimate & Movie version) to an event so big that it has caught SHIELD's attention. 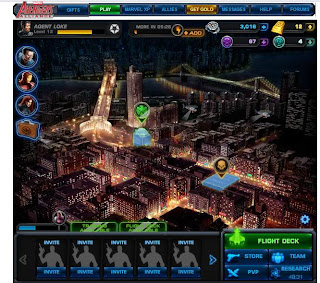 With the heli-carrier as your base, you go thru' the various districts of New York City (cleverly packaged into game-play chapters) where in each area, you would face villains in the form of the  Maggia, HYDRA, AIM, etc. At the end of each district you'd need to defeat Marvel villains as each district's Boss or/and Mini Boss before you are able to advance to the next district. The Bosses include Whiplash, MODOK, Loki & Baron Zemo. 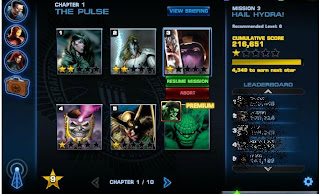 There are several dimensions to the game, as is ilk of facebook games where you need to have friends who have "joined" you so that you can accumulate various kinds of points or energy for you to advance or level up. This can be a little frustrating when you do not have enough of a certain game resource for you to proceed.

Of course, as with other facebook games, when all else fails, you can use "gold" to short circuit the process. However, as "gold" is very hard to come by in-game, players can opt to but "gold" with REAL WORLD MONEY!

Users are also required to do in-game research. Only when something has been researched will it become available to players. For instance, if you did not research Electrolytes, you would not be able to buy or get Stamina Boost Packs (Bummer!). So, if players think they can hoard their resources and save up for the heroes, they would sorely lose out on the goodies they can get from the SHIELD Store or End-Level Bonuses! 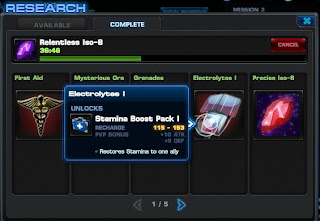 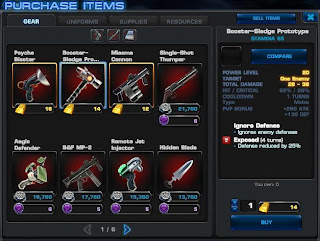 Games of this nature usually allow players to amp up their character stats (such as attack & defense) as they level up. 1 interesting twist to this game is that the stats do not level up in such a straight forward manner. Players need to perform research in order for you to get better weapons, equipment or SHIELD uniforms (that have differing stats based on 1 of the 6 classes*!)
* see below

Each class has a strength and a weakness against another, leaving no clear-cut advantage of any single class. 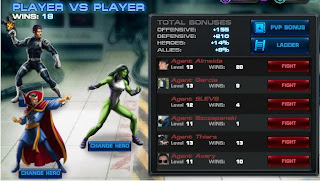 Lastly, players get to pit their Avengers against other players in the PVP (Player vs Player) area. This is an area where players can go when they have either run out of energy to do further missions or just to challenge friends (or rivals). 1 good thing is also players are able to get resources or equipment from the fights. 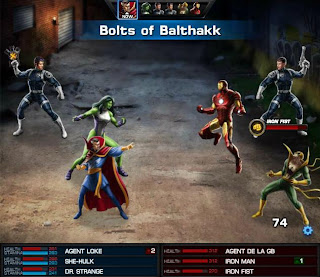 Characters
Players are spoilt for choice as there are 40 Marvel characters to choose from, including characters from X-Men (Phoenix, Colossus, Nightcrawler, Kitty Pryde, Cyclops,Storm & of course, Wolverine) & Fantastic 4. There are a couple of really unexpected choices in the game such as Sif (Thor's girlfriend), Dr Strange (who is more associated with the Defenders than Avengers) & Black Cat (Spider-man's 1-time girlfriend). Players start off with Iron as the 1st Avenger in your team but the game would soon require players to start recruiting other heroes. 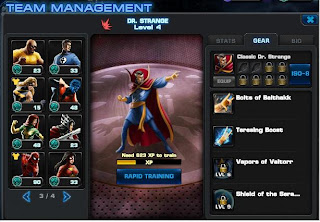 This is where things get interesting as these heroes all start with only 1 power and they gain more powers (up to 4) as the level up. I tend to let my curiosity get the better of me as I want to learn what each hero's powers are and how they would look in-game.

Appeal
This game is a dream come true for geeks like me who grew up reading and loving these characters for many years. Of course there have been other games like Capcom's Street Fighter vs X-Men and the Marvel Ultimate Alliance (both of which I had never had the pleasure to try).

It's fairly easy to get started as the in-game instructions (disguised as Maria Hill & Nick Fury's orders) make the learning curve very gentle.

This game has sucked quite a few hours of my life these past few weeks and I'm sure many of you would find it enjoyable as well.

1 gripe I do have is that a few of the more recognizable Avengers such as the following didn't make it to the game while characters Like X-Men & Fantastic 4 are in there.
- Vision
- Scarlet Witch
- Wonderman
- Beast
- Black Panther
- Wasp

Verdict
It's fun to get to play with the heroes you loved from a younger age but it it by no means a perfect game. Continuity geeks would have a field day with the inconsistencies of the characters. So relax, just enjoy it for what it is - a game with many of the characters you love.