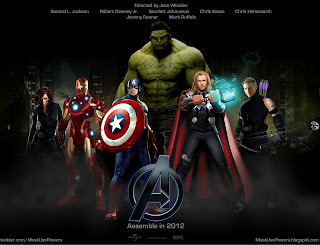 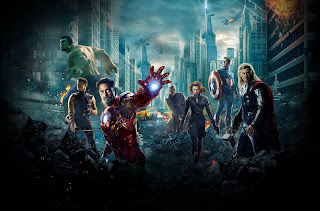 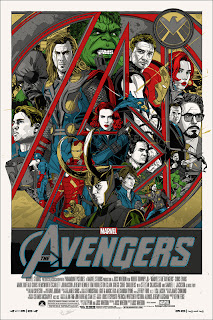 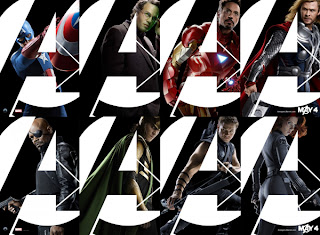 Story
The is a culmination of a series of post credit scenes of the following Marvel movies from the past 4 years namely:
Iron Man
Incredible Hulk
Iron Man 2
Thor
Capt America

The movie opens off-planet with Loki making a deal with an unidentified Alien. The deal was for Loki to deliver the Tesseract (an object that Marvel fanboys would immediately recognizeas the all-powerful Cosmic Cube) in exhange for an alien army so that he may attack Earth, his brother Thor's adopted world.

The Alien army Loki recruits are the Chitauri, the Marvel Ultimate Universe's version of the Skrulls. These little inconsistencies can become points where fanboy geeks would nit-pick about but as far as the general movie-going audiences are concerned, it doesn't really matter. However, on Marvel's part, it's a great marketing strategy as the prepare their movie going fans for both the Marvel & Ultimate Universe books. 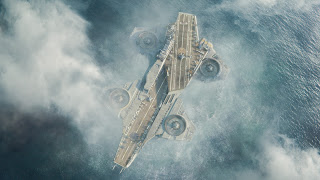 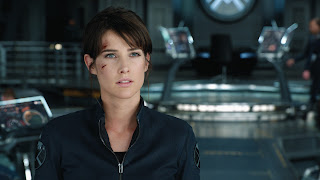 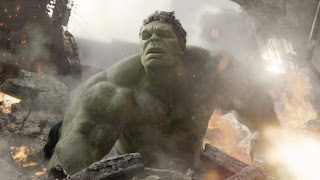 SHIELD has custody of the Cube and was studying it's potential as an unlimited power source when Loki appears and seizes it from right under Fury's nose. In the course of the battle, Loki mind-controls Hawkeye, Dr Selving (chief scientist studying the Cube) and several other SHIELD agents, destroying the SHIELD Base in the process. This is when we get to see the famous SHIELD Heli-Carrier make its big screen debut. It's impressive!

Retrieving the Cube has now become top priority and apparently it emits Gamma Radiation, and hence, can be tracked. Black Widow is then recalled from a mission to recruit Dr Bruce Banner (aka Hulk) as he is the top scientist on Gamma Radiation and can help them get the Cube back.

Meanwhile, Tony Stark (Iron Man) & Capt. Steve Rogers (Capt America) are on-board as part of the mission to locate Loki and the Cube.

They get an opportunity to confront Loki as he needed a rare metal called Irridium to stabilize the Cube before he could open an tele-portational gate to bring the Chitauri to Earth. The Avengers (Black Widow, Iron Man & Capt America) capture Loki and was on their way back to SHIELD when Thor drops in and seizes Loki from the Avengers.

As with most comic books, upon any first meeting between heroes, they have to duke it out. So, this formula is put to good use on the big screen as we see the Main Avenger guys (Thor, Cap & Iron Man) dish it out before they realize they are all on the same side. 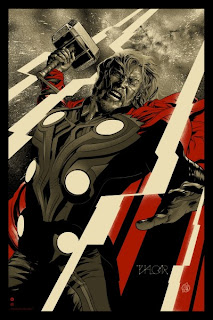 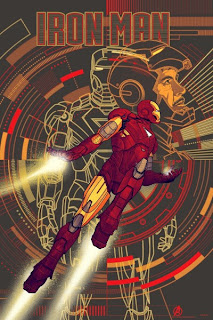 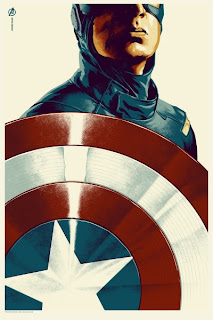 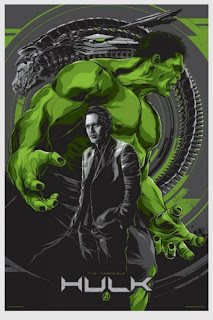 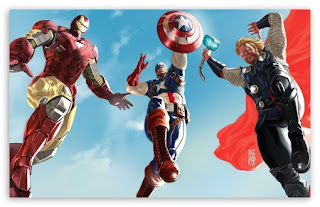 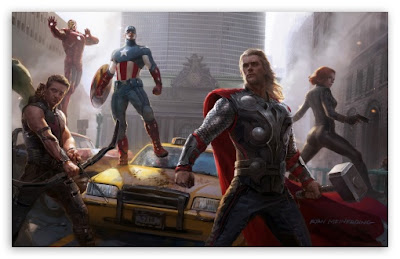 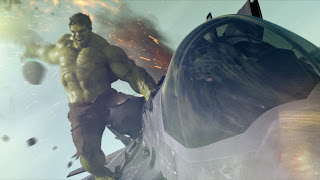 The mind-wiped SHIELD agents and Hawkeye then attacks the Heli-Carrier to help Loki escape. In the midst of the attack, the Hulk comes out to play and Thor immediately knows that he's the only one who could face the Green Goliath. Fanboys would love the part where the Hulk tries to lift Thor's Hammer - Mjolnir but fails.

Loki brings the aliens to attack Earth with Manhattan as the beachhead. That's where the Avengers head toward.

All hell brakes loose as the alien hoards come in thru' the portal in droves. The Avengers are spread thin as they're tasked with rescuing the people, fighting the aliens, close the portal and capture Loki.

Watch the movie to see how the heroes save the day! 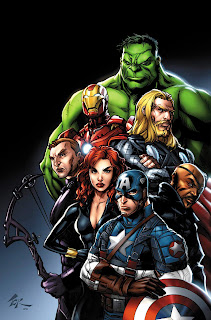 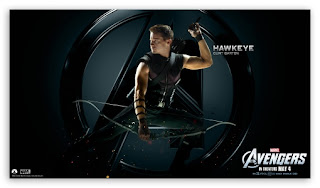 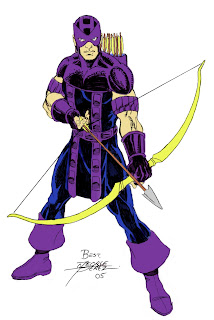 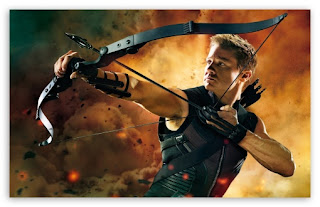 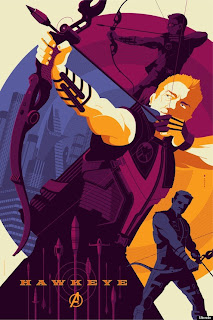 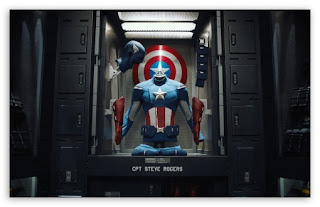 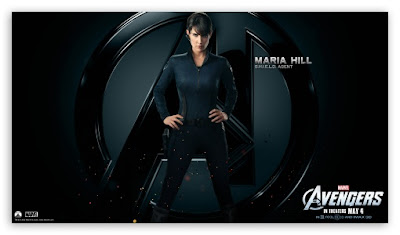 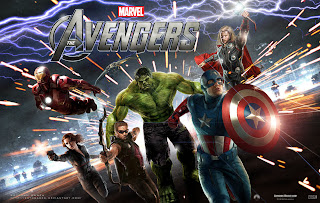 Acting
Well, what can I say? It's a superhero movie!

Overall
It is by no means perfect as I do have gripes about a few things. However, I believe my gripes are only because I'm a fan-boy geek who'se been reading the comics for years and nothing would ever please us. However, for the general public, this is indeed 1 of the, if not THE best Super-Hero movie to date!

Here are my gripes:

Thor without his helmet for the ENTIRE MOVIE!!!!!

The Avengers, especially Capt. America, do not kill! However, in this movie, the Avengers are pretty trigger happy. They kill mind-controlled SHIELD Agents & Chitauri as though they were playing a video game.

Hawkeye could've worn his Ultimates version goggles. Plus, he's too sombre. Give him back his witty banter!

In the final battle, Capt. America and Thor behaved more like spectators than heroes (and leader in Cap's case) as they see Iron Man save the day by going into the Portal. Cap and Thor would've put in at least 3 contingencies before Iron Man had even gone in.

The mixing up of the Ultimate & Marvel Universe Proper is really confusing for fan-boys like me, but then, as I had said, it's clever Marketing Strategy on Marvel's part, so it's all good.

LASTLY, I need not remind you that there is a post-credit scene (C'mon, you guys already know this by now!) where we finally see who it was Loki was making a deal with at the very start of the movie - Thanos!

We have seen Thanos' Infinity Gauntlet before. It was in Odin's Weapons Vault from the Thor movie.
http://jmerb.blogspot.com/2011/05/movie-review-thor.html 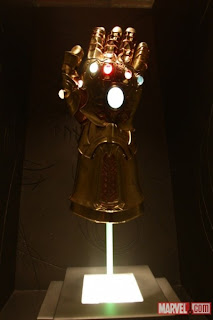 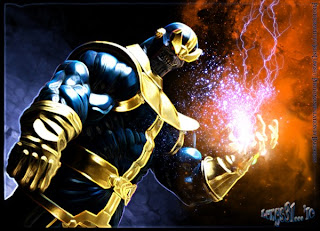 Well I thought it was a fabulous movie. Definitely not perfect and has some flaws but as far as comic adaptations go, this is right up there with the all time greats.

I mean you can see the labour of love that Joss Whedon had put in. Just like Bryan Singer did for X-Men 1 and 2, it is a great homage to comics when the Directors are fan-boys at heart.

This show's chock full of iconic moments which to a fan like me include:
-the SHIELD helicarrier : I mean talk about being blown away, it was awesome seeing it in a movie
-the iconic shot where the camera goes a circle around the heroes..blood warming
-the tussles between Thor/Hulk, Iron Man/Thor/Cap..
-the whole movie's take on Hulk..nails the character as the savage beast it is
- Dr Banner's cool "...i am always angry.." is to me classic and stole the show

I guess one major gripe I had was the depiction of Cap as being secondary to Iron Man. I mean I get that Robert Downey is lead actor given that he has more established acting prowess than most of the others and hence should take centre stage. But to me, Cap is always leader of Avengers. This should've come out much stronger in the film. Instead, he comes across a bit staid, square and boring to the layman. Because I enjoyed the Cap America movie so much (much more than Thor, Iron Man 2), I thought it a pity to see Cap being 'sidelined' here.

Apart from that, I see your minor quibbles with the costumes and stuff in your review. But in the larger scheme of things, the movie does capture the feel of reading an Avengers comic. 20 years ago, we would never have dreamt of Avengers being done in its live action glory.

I think Marvel has outdid themselves here. With the individual hero movies building up to this is really clever. On another score, Avengers is also very much about the iconic Vision, Wasp, Ant-Man and we look forward to the sequels.

Hey, great to hear from you and it's no surprise that you might've caught it even earlier than I did?

Anyway, yes, I agree with you that there were plenty of hidden gems in the movie that would please the fan-boys.

I'm also really happy to hear the movie is breaking all kinds of box-office records all over the world - which is good news 'cos now, we can expect more studios to start investing in this genre, and we get to see more of what we love done right.

You read my mind in your last paragraph. See my earlier post on who I think ought to be in the NEXT movie. =)