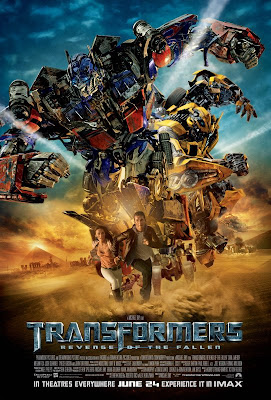 Movie Title
Transformers: Revenge of the Fallen (aka Transformers 2)
It's confirmed there will be a 3rd Transformers movie by Michael Bay out by 2012 (not 2011)!
Year
2009
Genre
Action, Sci-Fi

Megatron had a boss who wore a head-piece! 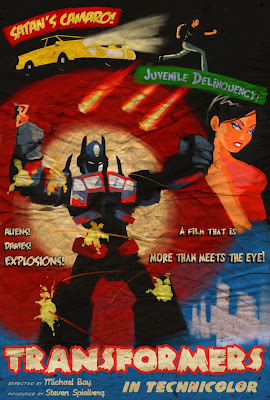 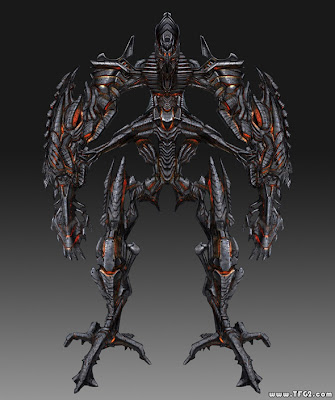 Story
Apparently, the Cybertronians had come to Earth way longer than we had been told in Movie 1. The Fallen (one of the few earliest Cybertronians, called Primes, tasked to find Energon - the “energy food” that keep Cybertronians alive – all across the universe. However, Energon is harvested by destroying the sun. 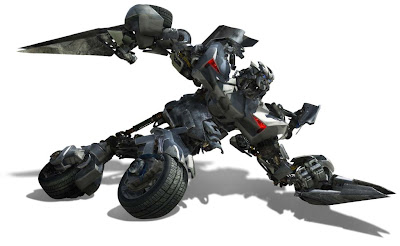 So they had a strict creed that only worlds with no living beings were allowed to be harvested. As with any group, there is always a black sheep among them as the Fallen, a name he earned for wanting to harvest our sun, dear old Sol. This forced the other Primes to stop him. They did, however, the destructive sun harvesting machine is still intact on Earth. The only thing stopping the Fallen from finishing what he started so long ago is that the key to trigger the machine, the Matrix, is hidden.) was here thousands of years before Megatron crashed in the North Pole. 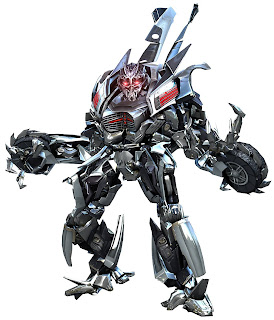 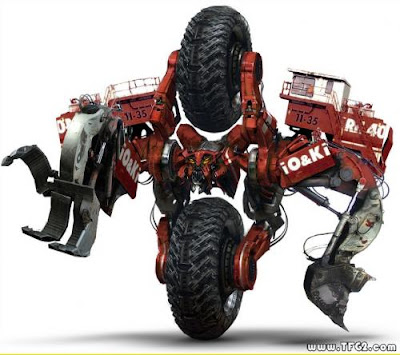 The movie is set 2 years after the last movie and the Autobots have joined forces with American Military in an outfit called NEST, tasked to hunt down any remaining Decepticons hiding on Earth. The Autobots have added a few new members to their team including Arcee, Sideswipe, Skids & Mudflap. Another Government official, while making a case to shut down NEST, had inadvertently revealed that the US government is still holding on to a shard of the Allspark cube, to an orbiting Soundwave who was tapping the ComSats (Communications Satellites) for intel just like this.

Meanwhile, Sam Witwicky (Shia LaBeouf) was packing his things preparing to go to college when he accidentally discovered and activated a shard of the Allspark cube still lodged in his jacket. Somehow, this had planted the location of the Matrix into Sam’s mind in Cybertronian code. These 2 events trigger the Decepticon’s new campaign to find the shards and revive Megatron (and this time, he returns in the form of a Cybertronian tank.). 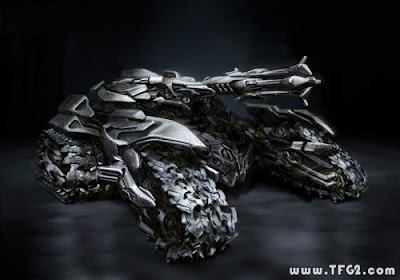 During this retrieve and revive Megatron phase, we see Ravage and the Constructicons (who would form the giant robot Devastator) deployed. Sam was in danger yet again as the Decepticons need to extract the location of the Matrix from his mind. In their effort to decipher what it is that Sam sees in his mind, they manage to find a Decepticon who had been hidden here on Earth for years – Jetfire. As Jetfire is an old Decepticon (What?! Weren’t the audience paying attention in the 1st movie? Transformers are all old as they had been at war for thousands of years already!) and he’s had it being a Decepticon and decides to switch allegiances. 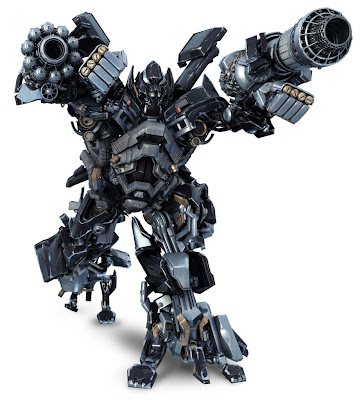 Well, it all comes to together in the deserts of Egypt where we see lots of robots fighting, people running and explosions! 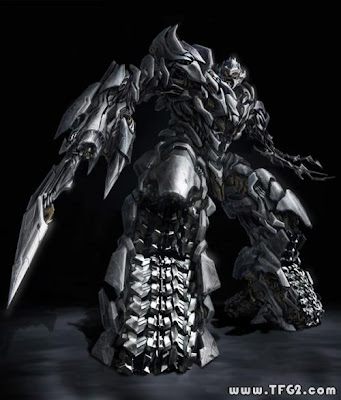 Acting
Well, Megan Fox had skimpy clothing on for most of the movie and was running around. That’s pretty darn good acting! Oh yeah, there were some other people and robots in there as well in many scenes with lots of explosions! 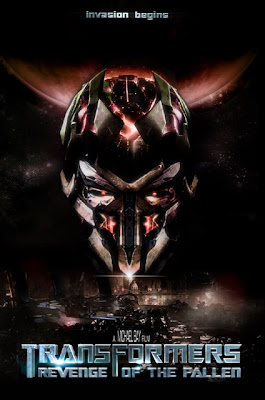 OK, I have to say John Turturro as Agent Simmons is brilliant. He, along with Leo (Ramon Rodriguez) - Sam’s college room-mate who is a fanatical conspiracy-theorist - and Sam’s parents provide much of the lighter moments to the movie. 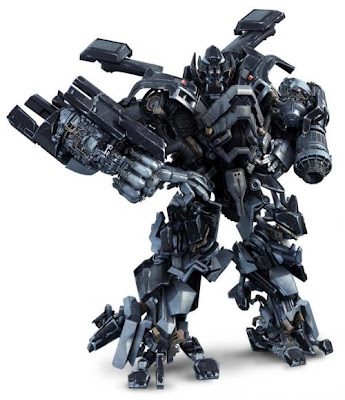 Overall
What was the Terminator Wannabe babe, Alice (Isabel Lucas), doing in the movie as Sam’s college mate? (Update: According to message boards at TFW2005, the character of Alice is a Pretender.) 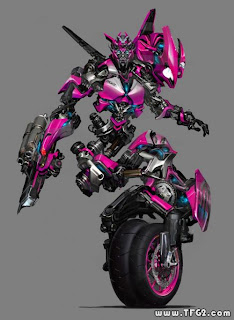 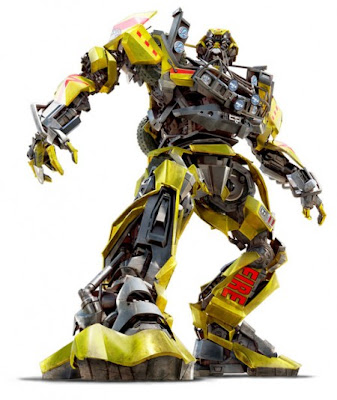 Seriously, for a moment, I thought I was watching bits of Terminator. Not cool – won’t go down well with fans! 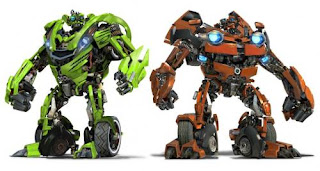 I know the powers that be want to accommodate the younger audiences but the Skids and Mudflap twins – C’mon! And for those who have seen what Jetfire was supposed to look like in robot mode – the movie version is…let’s just say, they toy would probably not sell very well. 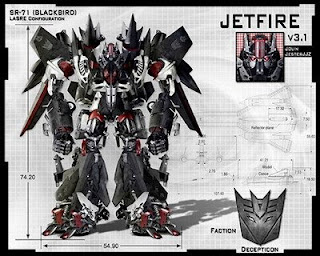 I am sure many fans and casual viewers would be disappointed by the non-existent air-time or character development given to new characters on both sides of the divide:
- Soundwave (my all time Transformer along with Shockwave) 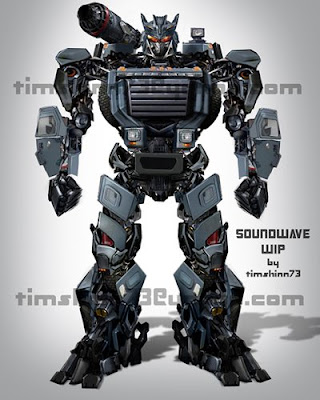 Despite its flaws, there were lots of good stuff to sink your teeth into. So, despite some of the bad-press it’s received thus far, I’d still recommend it as a must watch regardless if you are a fan or not. 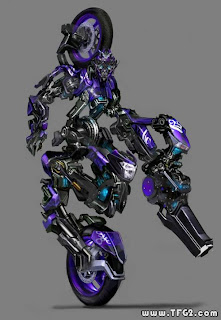 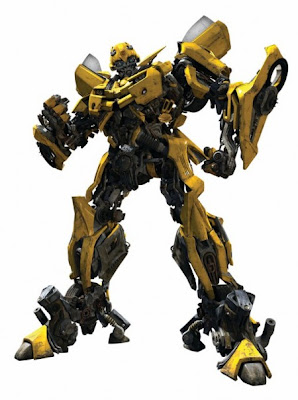 hehe.....totally agree bout that supposingly sexy alice...she s nothing but gross!!!eiw..
for me i think that part one is still much better.(many surprises as first introduce to transformers)
yet part 2 is not disappointing but not extra surprising too...at least i dont feel annoyed.btw.i still prefer watching robots fighting from humans.about the twin robots.(they are quite irritating at times,forever babbling)still was kinda thrilled when the red one did not die after being sucked into devastater(is it what its called?)one thing.wat happened to the blonde hair girl + her black genius hacker?they are replaced by sam's new college friend huh?

oh yeah.i love that toy truck perverted alien...especially when he rub himself againts megan fox..haha..i think jetfire is meant for entertaining purposes only...

Hmm, I still have not found any answers to who that blonde chick Alice is. There was no explanation in the movie. So if any of you out there know what it was, I'd be glad to hear it.

As for the 2 hackers (the blondie was a comms signals analyst) in Part 1, yeah, I miss 'em too.

As for Jetfire, look at the picture, he could've been as cool and mean as Megatron, only he's a good guy! A mean Autobot Jetfire would've rocked!