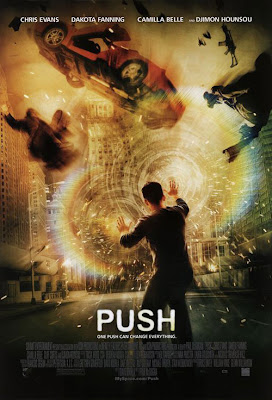 Story
The movie begins with a scene where Nick Gant (Chris Evans) and his father who were Movers (Telekinetics), ran away from the "Division" and was being tracked down by Agent Henry Carver (Djimon Hounsou) from the "Division". Nick's father told him there will be a girl holding a flower who will seek help from him, and he must commit to help her out. That girl, Cassie Holmes(Dakota Fanning), who is a Watcher, has the ability to see the future and sketch it out. But more disconcerting is her swear, get drunk and pack heat. Apparently, the Division is after Kira (Camilla Belle), who survived the injection given to her 10years ago & can plant thoughts in other people's minds. Nick, who was dating Kira before he made his escape from the Division, was forced to seek help from his friends, "Hook" Waters (Cliff Curtis), a Shifter (illusionists) and a Shadow (who use their minds to hide things & block Sniffers' powers) named "Pinky" Stein (Nate Mooney) to hide Kira from the Sniffs (who can track their quarry like bloodhounds by taking objects to glean history of where it's been in relation to its owner) . Also, Nick and Cassie also sought helped from Emily Hu (Ming Na), a highly skilled Sniff who can help them locate Kira. Cassie's been a great help to Nick throughout the movie. 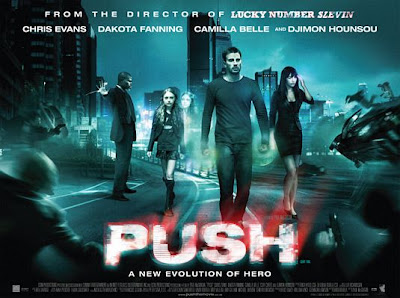 Also, some whose skills are truly creepy, like the family that can shatter glass and pop blood vessels by screeching at the top of their lungs. Yes, this is a silly movie that is partially engrossing. The categories of paranormals have names such as Watchers and Shadows. Cassie goes in search of Nick. They go in search of a mysterious suitcase that The Division, represented by a malevolent Agent Henry Carver, also was looking for. Along the way, they encounter Kira. The only interesting part of the story is when Nick plans what his comrades should do when he himself goes to another Agent who can wipe off memories, of course, to erase what he has written on the papers. The ending, was rather disappointing to the audience as it really, I repeat, really was a turn-off. After Nick injected himself with the syringe filled with the superpower-enhancer liquid, we expected some form of changes in him, like "The Hulk"! But no, turns out to be a silly & lame Chinese soy-sauce in the syringe. There, the story ended up like that. BUSTED! 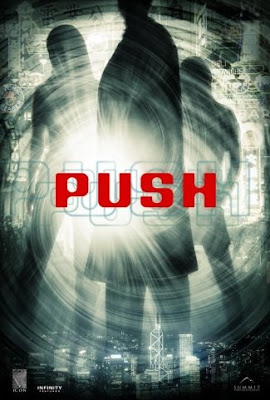 Acting
Again, Dakota Fanning has proven herself to be a talented actress, from a weak little girl from War of the Worlds, to a squeaky and brave Cassie Holmes. Camilla Belle, who starred as Evolet in 10,000BC (http://jmerb.blogspot.com/2009/01/movie-review-10000-bc.html), did a good job in portraying her character required by the role. Chris Evans, another turn off, expected to be better, but he speaks Cantonese! Good interaction between the Westerners and Asians in the movie.
Overall
Beside the special abilities, there's nothing much to fancy about in this movie. Complete turn off. But for those who like to be shifted from the reality, it'll make a good movie to kill time – that's of course, last resort. =)
Order your copy here: http://astore.amazon.com/eareotbi-20/detail/B000GTJSDA
Review by Johnson Tee
Posted by JM Loke at 4:49 PM