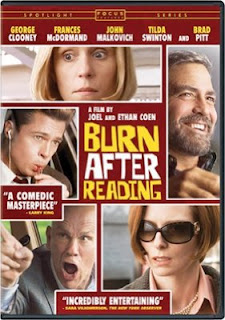 Story
The movie starts off with several seemingly un-related threads that eventually come together. However, the time it took for the audience to see how they are all inter-related is simply too excruciatingly painful.

Osbourne Cox (a tired & always angry John Malkovich) is a senior CIA officer who was basically put into cold storage. Hence, he quits and starts to write a memoir of his experience with the agency. Meanwhile, his wife, Katie Cox (the villainous-looking venom-spouting Tilda Swinton) is secretly having an affair with Harry Pfarrer (George Clooney ) and had planned to get a divorce from Osbourne Cox. It was during one of her visits to her divorce lawyer’s office that she accidentally drops a CD with Top Secret CIA data from Osbourne’s memoirs into the lawyer’s gym bag.

Gym staff Chad Feldheimer (Brad Pitt) & Linda Litzke (Frances McDormand) picks up the CD that was left outside the locker room and decides to use it to get some reward money from the owner. However, things go really awry and we get to see how they all are related.

Acting
Of course the acting is superb, especially from McDormand. Pitt and Clooney seem pretty comfortable in their roles here. Perhaps it’s because they have done this before… And Malkovich is his usual angry self.

Brad Pitt and George Clooney fans are sure to be looking out to stone me but they didn’t really do much to help alleviate the movie from the mire it was in. OK, you can safely conclude that I’m not a big fan of the Coen Brothers’ work.

Its suppose to be a comedy right.. Is it funny or entertaining at all?