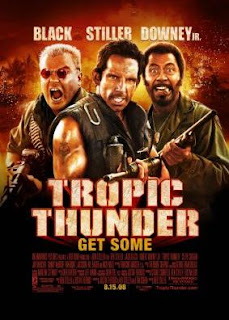 Story
It’s a bunch of actors playing supposed top notch actors, in their respective genres, who are supposed to be playing soldiers but end up doing a whole lot more than what they had planned or bargained for. The movie is a little predictable but this is still watch-able fare.

Acting
I can’t really say that there were no award winning performances in there (‘cos there was!). Anyway, nothing really different from the likes of Ben Stiller and Jack Black. However, Robert Downey Jr. is completely something else. In this movie, he plays an Aussie actor playing the part of an African American soldier. His performance here almost blew me away! At times, I really forgot that this was a white guy because he sounds blacker than the real black guy (Brandon T. Jackson)!

Overall
There’s an awful lots of expletives for a comedy but if you can overlook that, there are enough good bits in there to keep you interested.