Not knowing has never been this rivetting 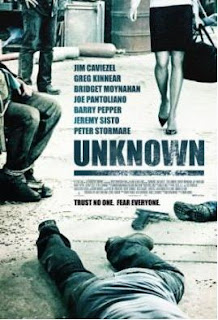 Story
The movie opens with 5 unconscious men in an abandoned warehouse in the middle of a desert. It is evident that they had all been in a skirmish as one of them is shot while handcuffed to a railing, another is bound in a chair, while 3 others were on the floor bruised and battered. One by one, they awaken but none of them remember who they were or why they were there. Jean Jacket (James Caviezel) was the first to awaken and start to try and figure things out. As the others, including Rancher Shirt (Barry Pepper) & Broken Nose (Greg Kinnear) begin to stir, the viewers start to piece together that this was a kidnapping case gone extremely wrong. Nobody (including the viewers) knows who the victims or the kidnappers were. What makes the movie so intriguing is that tiny morsels of info on the 5 gentlemen’s background are thrown in via flashbacks (their respective memory resurfacing in pieces) makes the viewers want to find out who they were and what exactly brought them to that point in the movie (plus how did they lose their memory?). Of course, the mystery unravels as the movie progresses and you will eventually find out what happened.

This is a good watch because it doesn’t portray characters as clear-cut good/bad guys. You are kept guessing until the very end and even then, it is open to interpretation. This is because the ending has a revelation that compels the viewer to interpret what had actually gone before and make a call as to who the actual villain is in the movie.

Acting
Great acting from the main cast. I had always enjoyed Caviezel & Pepper’s acting. I tend to watch almost anything that has Caviezel in it. Movies such as Passion of the Christ, Count of Monte Cristo & Frequency come to mind.

Overall
It is a pity that this movie (and quite a few others of this quality) didn’t make it to our cinema circuits.

It’s a very good watch. Kept me at the edge of my seat right up till the very end. Good way to spend 1.5 hours. I recommend it.