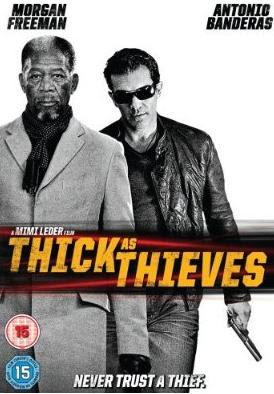 Story
Veteran art thief, Keith Ripley (Morgan Freeman) resurfaces apparently to do a final job as repayment to the Russian gangsters. When Gabriel Martin (Antonio Banderas) completes a daring job, Ripley enlists him for it. In the midst of all that excitement, Martin mixes it up romantically with the daughter of Ripley’s deceased partner’s daughter Alexandra Korolenko (Radha Mitchell who also appeared in Henry Poole Is Here http://jmerb.blogspot.com/search/label/Movie%20-%20Henry%20Poole%20Is%20Here )

Acting
Wasn’t really impressed with the acting here although it doesn’t really distract viewers if not much thought is given to analyzing the acting. Of course, Morgan Freeman can do no wrong. 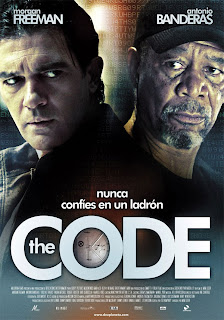 Overall
It doesn’t flow very well as the pacing, editing and direction could have been much tighter for a more enjoyable ride for the viewers. It did seem to have all the right ingredients – action, intrigue, honor, loyalty, betrayal, romance, suspense, humor, etc.

The flashback right at the start of the movie creates a question that doesn’t even begin to unravel until more than halfway thru the movie. That felt as though the movie makers have somehow forgotten about it and unfortunately, some viewers might. In the end after we have discovered some of the hidden truths about the characters (read: twists), it still didn’t feel satisfactory. The police was once again made to look like bumbling fools in the movie.

The planning and execution of the job is always interesting. That, for me, was the best part of the show. The ending was a little ambiguous for me, but the sad thing was that, I (and maybe other viewers) didn’t/won’t really care. It’s not all that bad, just that it could’ve been so much more, with stars like Freeman and Banderas at the helm.
Rating: 5/10
Posted by JM Loke at 5:13 PM