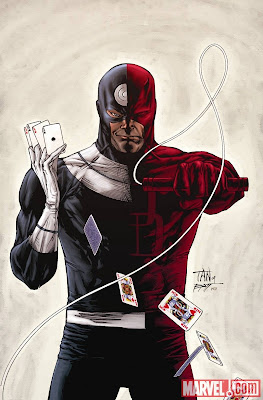 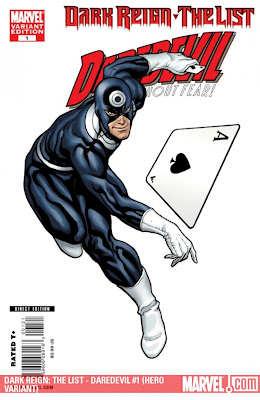 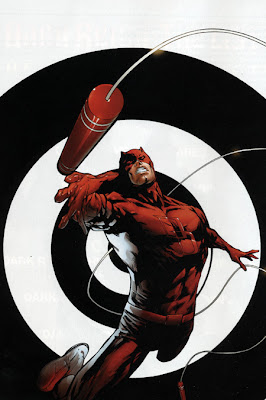 Story
The Hand (the underworld organization that had plagued DD’s life for years employing ninja assassins) had offered its recently vacant leadership to one of their greatest opponents – Matt Murdock (DD’s civilian guise), after discovering that their former leader – Elektra, was an alien Skrull impostor (see Secret Invasion). http://jmerb.blogspot.com/2008/12/cpmic-review-secret-invasion.html

There are 2 stories in this issue:

The 1st one has Osborn setting Bullseye on DD and Bullseye gleefully takes the opportunity to snuff out DD, his arch-memesis. However, that doesn’t happen in this issue as Bullseye arrives immediately after DD’s initiation as the Hand’s leader, taunts DD into following him on a HAMMER copter. Bullseye leads DD to a tenement to be demolished but full of occupants who refused to budge. There, he blows up the whole building and kills all 107 occupants. DD meanwhile looked like he had just about taken all the body count he could from Bullseye and that’s where the issue ends. Readers will need to pick up DD 501 for the continuation.

The 2nd story had DD mulling over the deaths of the 107 tenement occupants and was speaking to someone named Izo, who seems like his former guru, Stick. Having realized how the rules of engagement had changed in their dangerous “game”, DD was looking at the whole hero’s responsibility matter drastically different – like making use the Hand in his work. Before DD assumes his mantle of leadership, to complete his initiation, a life-sacrifice must be made. Similarly here, readers will need to pick up DD 501 for the continuation.

Art
Billy Tan turns in great work as always. And it always brings me pride to know that Billy Tan is our Malaysian Artist who has made it big. However, having been fed the dark & gritty realism art from Alex Maleev, I feel that Billy’s art is more suited toward the more super-heroic characters like X-Men, Spider-man, etc. 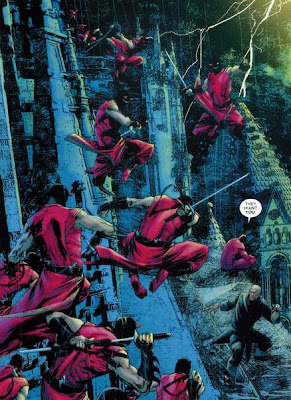 You may accuse De La Torre of being a Alex Maleev copy-cat but it is nevertheless great art-work. There is a hint of influence from Neal Adams and Bill Sienkiewicz in there as well. This is a guy to watch. 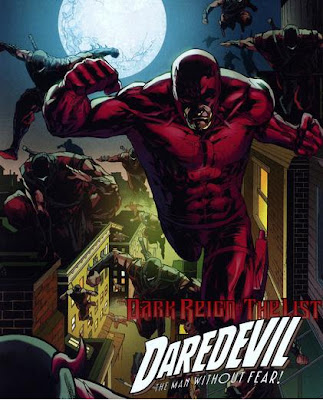 Additional Comments
The story is a little too light for my tastes, not meaty enough. Altho’ it was still a good read with great art.

It was also nice to see really obscure characters like the Black Tarantula and White Tiger appear here.
Order your 33% discounted copy here:http://astore.amazon.com/eareotbi-20/detail/0785142363
Posted by JM Loke at 1:07 PM